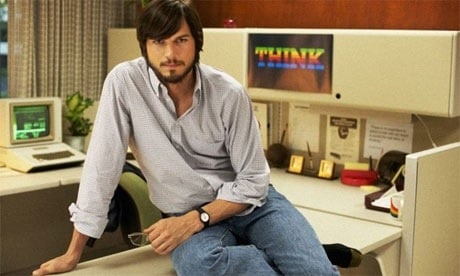 Apple acolytes are eagerly awaiting the launch of biographical drama film, Jobs, which chronicles the journey of one of the most influential innovators of our time, Steve Jobs – played by Ashton Kutcher.

A year has passed since the death of Steve Jobs, but his story – from college dropout to successful creative entrepreneur – lives on to be told over and over again. No-one can deny the man left his Apple-shaped imprint on the world.

Set between the 1970s and 1990s, the film encapsulates the humble beginnings of Apple and Jobs’ rise as an innovator.

Yes, even Apple was once a startup that faced the same struggles many startup owners do today. Lack of funds, limited investor reach, little scope for marketing.

Since its debut at the Sundance Film Festival in January, Jobs has received a fair amount of negative reviews.

Germain Lussier of Slashfilm wrote: “While Steve Jobs changed the world with his innovations and forward thinking, the first biopic about him, Jobs, does not … [T]he film feels slight because it tries to do too much. The effort is there and the film is entertaining, but it feels like the PC version of the story instead of the Apple.”

Ed Gibbs of the Guardian acknowledged still “the essence of Jobs the creator, the insanely driven cultural game-changer, is intact, in line with his public and professional persona.”

On IMDb (Internet Movies Database), the film got an average of 6/10 from over 2000 voters, which is fairly poor. From personal observation, if a film gets below an average of 7/10 on IMDb it’s likely to be unsatisfying.

Interestingly, Apple’s Co-Founder Steve Wozniak is unimpressed by the “very wrong” portrayal of personalities in a scene where Jobs tries to convince Wozniak that his operating system could be sold to the masses.

Nonetheless, for entrepreneurs seeking insight into the early days of Apple and the startup process, it may evoke inspiration – maybe even motivation to turn Apple onto its head and become the next big thing in the world of technology.