Shout a mate through new app 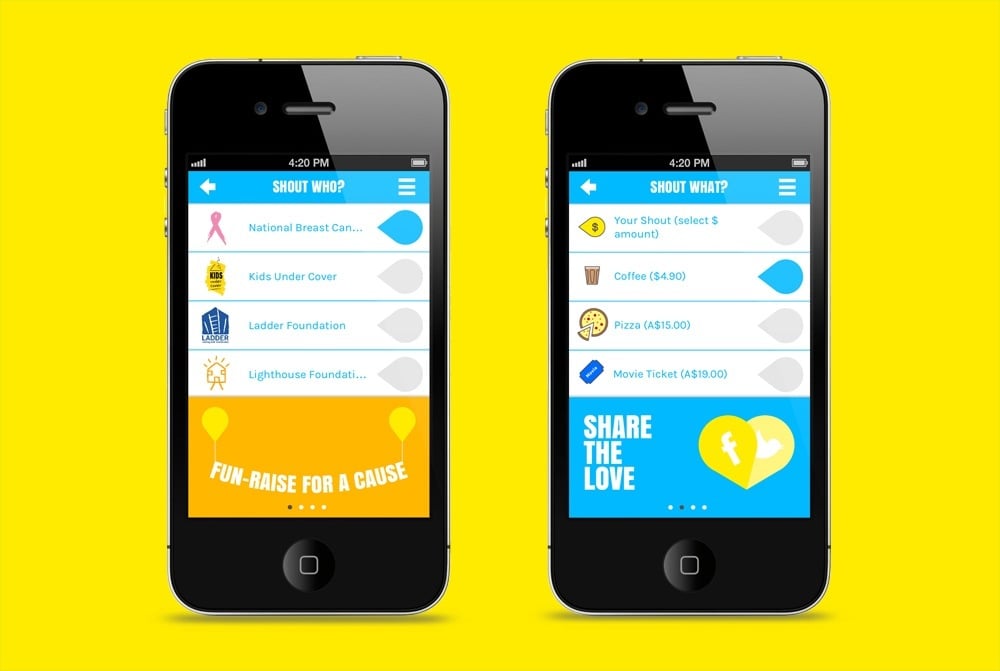 New app Shout provides a channel for people to make micro-donations to any cause through their smartphone.

After noticing how disengaged people have become with “the act of giving”, entrepreneur Jane Martino decided to create a platform that not only makes fundraising easier but enables a better social experience. Twelve months later, Shout was born.

When someone makes a micro-donation to a cause of their choice, they can provide a subsequent call to action (It’s Your Shout) through their social networks to generate more donations.

Martino says Shout embodies the Australian ethos of a ‘shout’ – looking after your mates (in this case, people in need).

So how does the app work?

The app is free to download and users simply create a secure account with their credit card. They can open the app at any time, select a cause from Shout’s ever-growing list, and choose an item like a coffee, beer or move ticket, and the value of this item is deducted from their credit card and paid to the organisation of their choice (minus Shout’s administration fee).

“The app is perfect for specific drives and causes, and in the case of emergency fundraising, we can be live within hours to collect on behalf of an organisation without the normal set up costs or payment delays,” says Martino.

Unlike other fundraising products, Shout allows users to make small donations and uses everyday activities as a prompt for giving – like shouting someone a coffee or a beer.

The app also connects to its user’s social media accounts, but “avoids the perception of bragging”. This by showing an image of the item that is shouted, the logo of the charity or cause selected and a message saying “It’s Your Shout”.

“It is more than a device or an app, it is an instrument to change individual behaviour for the benefit of the world,” says Martino.

Shout charges a 6.5 percent administration fee to cover business costs – such as marketing and promotion – and costs to co-campaign with key charity partners.

While Shout is not non-for-profit it does aim to lower the costs non-for-profit organisations incur when fundraising – by increasing the level of funds given to them.

“We believe that Shout as a business model must be sustainable so it can deliver more value to the non-for-profit sector and innovate to create other products that service the sector,” says Martino.

“The success of Shout is measured by the amount of money delivered to those who need it. We are a commercial, for purpose business that is intent on doing something to change the world for the better.”

While people have been praising the idea, it’s been a challenge to translate that into people actually downloading the app and donating.

“Once this is done we have the continual challenge of keeping people Shouting. We know we are asking for people to change their behaviour and it is a big ask,” says Martino.

“We also are having to convince existing, conservative and usually very cautious organisations, whose best interests are those of the people they fundraise for, that we have a great solution for them. It’s a typical early adopter/late adopter scenario, but we are trying.”

In just three weeks since its launch, Shout has been downloaded 50,000 times, suggesting that “the concept must be resonating.” The app also ranked number one in the App Store for free apps.

Shout also collaborated with The Block and NBCF and raised $40,000 in just two weeks.

“This proved to us the power of the tool we had invented and the potential for its use,” says Martino.

Her advice for other startups is to be prepared to work hard, learn and evolve.

“No-one is going to swoop in and buy your idea for millions. Nothing is going to happen unless you are prepared to work really hard, but at the same time always remember why you are doing things. As Steve Job once said ‘The ones who are crazy enough to think they can change the world, are the ones that do’.”

Why is social entrepreneurship important?

Martino says social entrepreneurs “have the best ideas, the hardest work ethic and the rings on the board in regard to making things happen”.

“Social entrepreneurs take action in business but with a conscious. One that considers not only the idea and the potential financial return, but the effect their idea will have on people and the planet. Current and future generations really do care and this will be their most powerful way of demonstrating that.”

Given how prevalent commercialism and consumerism is in our culture, more effort needs to be placed on demonstrating that businesses can provide financial AND social return.

“We need to show compassion to everyone when we are doing business. Social enterprise combines all of this and ensures a true win-win. Who else’s responsibility is it if Australia (and the world’s) bright stars of business don’t attempt to play a part in changing the world?” says Martino.

You can download the Shout app directly from the iTunes store, or visit this link to set up an account and pledge online straight from your computer.