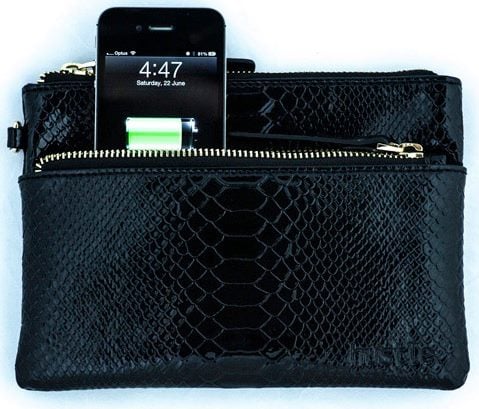 Bow down before husband and wife team, John and Lisa Winters for not only creating one of the most exciting products of the year, but offering a stylish solution to a common first-world dilemma – dead phone battery!

No need to hustle through the chaos of your handbag to find that smartphone charger you left at home, because Hustle has a solution! The Aussie startup offers a range of stylish bags and wallets that can charge any smartphone on the go – four times in a row.

Inspired by the frustration they felt when their phone batteries went flat day after day, Mr and Mrs Winters decided it was time to innovate.

“Carrying around a charging cable and trying to find a plug to charge up was very unproductive, and we knew we had to come up with a better solution to stay connected in style,” says the husband and wife duo.

Targeting fashion and style conscious smartphone users frustrated with poor battery life of their smartphones, the duo is set to shake up the marketplace.

“Our research shows that over 80 percent of smartphone users are frustrated with poor battery life. People rely on their phones for so much more than just phone calls these days, and can’t afford to be disconnected,” says Mr and Mrs Winters.

Hustle was officially launched on July 7th 2013, with a crowd-funding campaign on Indiegogo. The campaign ends in four days and they’re currently sitting on just over $80,000.

At present, Mr and Mrs Winters are implementing two main marketing strategies – PR and social media. PR practitioners help secure interviews, articles and features in newspapers, magazines, radio and TV, while social media platforms such as Facebook, Twitter and Instagram help create buzz around the products as well as a space to engage with customers and potential customers.

The husband and wife duo design the bags and wallets themselves – making sure they compliment current style, fashion and tech trends – then send them off to their manufacturing partners in China.

Unsurprisingly, the public response has been “amazing”, particularly to the idea of having a fashionable technology product that makes life a little easier.

“So many people complain about how bad their phone battery is, and we have provided them with a solution that is not only practical but stylish too,” says Mr and Mrs Winters.

Like many other startups, the biggest challenge for Hustle was access to initial capital – the key reason Mr and Mrs Winters turned to crowd-funding.

“Crowd-funding can be an extremely powerful tool for startups but we quickly learned that building awareness of your product is the key to a success crowd-funding campaign.”

The duo admit that “their PR and marketing push didn’t start early enough to build enough awareness of our brand and campaign.”

Given the excitement around the product, Mr and Mrs Winters plan to go global very soon.

“We have had an amazing response and many enquiries regarding distribution from all around the world. We are now putting in place formal distribution agreements for major regions, while confirming initial orders.”