From Italy to Australia, launching a gaming empire 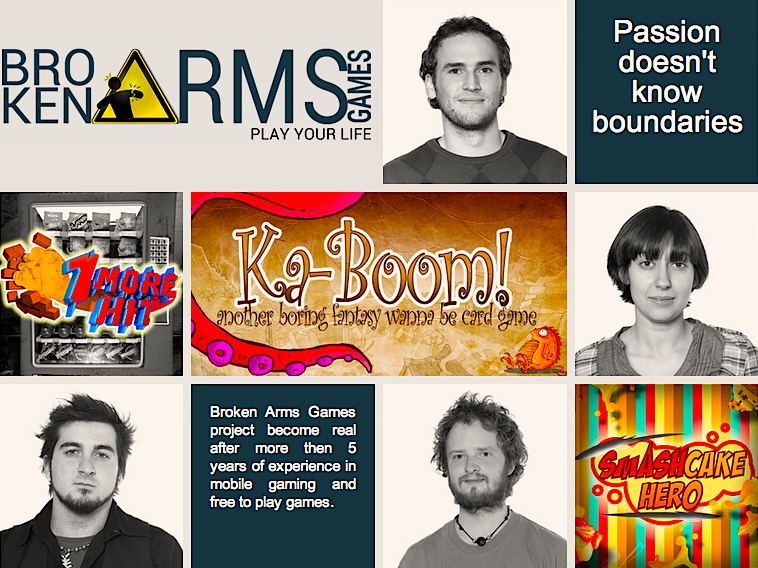 Broken Arms Games is a young independent team of game developers passionate about creating innovative mobile and online entertainment experiences. They’re one of the few international startups that have been accepted into the 2013 ANZ Innovyz START Accelerator Program.

The company produces both original games and bespoke games for corporate clients like Fiat and Samsung. They recently launched their original game Ka-Boom in beta mode and plan on overhauling other card games in the mobile market.

“Card games are generally difficult to play, so we are trying to fill in a gap in the market by creating a fantasy card game, with great cartoon visuals and simplicity so every player can enjoy it in their own way,” says Elisa Farinetti, CEO of Broken Arms Games.

Coming from diverse technical backgrounds, the trio have different visions for the future of technology. But as a group, they’ve found a way to merge their ideas to satisfy clients, gamers and themselves.

They want to leverage the fact that mobile gaming is one of fastest growing markets worldwide. In Australia alone, it was estimated that $730 million will be spent on on digital games subscriptions, virtual goods and mobile games in 2013.

But with a rapidly growing market, Farinetti says it’s important design games so that they appeal to a wide range of players.

“Take our new Ka­-Boom game, for example, that can reach different sectors of the market due to its flexibility. Ka­-Boom is mainly a card game, but its core logic is based on puzzle games. Every player can enjoy it in a different way,” she adds.

“A kid could play it only on single campaign mode collecting all the cards, while an experienced gamer will enjoy also the story behind the games and all the crafting system to improve his experience.”

To date, the Broken Arms Games team have chosen to bootstrap, but they feel that to expand their ideas and products into the global market, they will need help on financing, marketing and business development.

“That is why we chose to apply to the ANZ Innovyz START program, to help us identify what investment we need,” says Farinetti.

They’ve been quite creative and quirky with their marketing strategies – going beyond the usual Facebook and Twitter promoting.

“We’ve created a lot of content around our games – pictures, artwork, and we created a series of comic strips about the team called “Broken Arms Tales”. We want to show the public who we are as a company, and to show them and what we do to make games,” says Farinetti.

The gaming industry employ a range of business models. Ka-­Boom is using a freemium model, so the game is completely free to play, but inside the game they’ve implemented an advertising system and an in­-app ­purchase market to buy goods that improve the experience.

The biggest challenge they foresee is getting the product in front of the consumer. Given there are a lot of new games being released on the AppStore everyday, Farinetti says it is going to be difficult to stand out from the crowd.

However, while in beta mode, Ka-Boom’s downloads have been steady and more excitingly the average time of gameplay has been approximately seven minutes.

“For this type of game, this is a long time, and it confirms that people love to play our game,” says Farinetti.

Broken Arms Games will be participating in the 2013 ANZ Innovyz START 13-week accelerator program based in Adelaide, South Australia.

“Our goal is to build a more structured operation and to successfully launch our products globally. We were looking for a start-up accelerator program that would boost our business and were really attracted by the huge experience and influence Dr. Jana Matthews and her team offer,” says Farinetti.

The app is available to download in Australia, Italy and Canada via iTunes.

Take a tour of their funky site at www.brokenarmsgames.com.