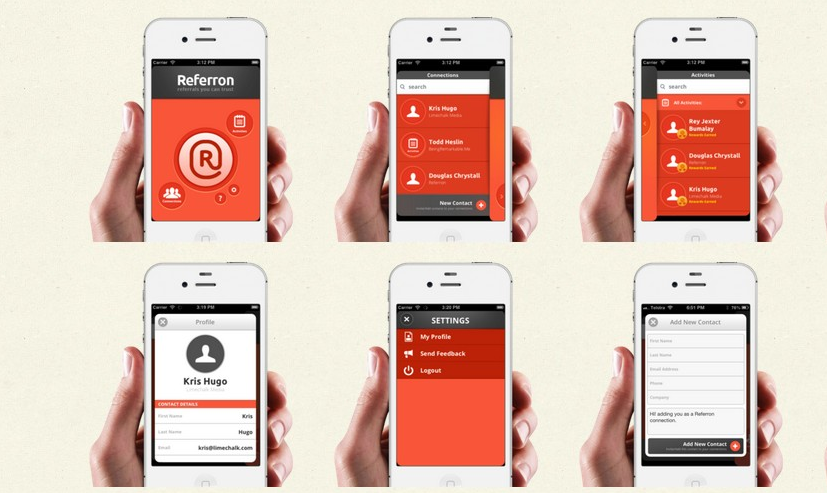 During their official launch at CeBIT Australia, The Referron app had over 300 technology innovators making referrals to each other over the three-day conference.

The new venture is an Australian mobile startup based in Sydney, NSW and Boston, MA. Founded in early 2012 by Ivan Kaye and Todd Heslin, the team set out with the goal of making it easy for anyone to make referrals to businesses they know, like and trust at anytime, anywhere.

“Referron has been identified as the missing tool for every business that relies on word-of-mouth referrals. Using the smartphone app, just a few taps are all that’s needed for the champions to send their friends as qualified prospects to businesses they know, like and trust. Early customers using the app are seeing 3-5x increase in referrals” says cofounder and architect of the app Todd Heslin.

“CeBIT was the perfect example of people connecting with people. We didn’t need to sell Referron. We simply gave our customers the keys to test drive a new way of connecting with their champions.” Whilst Todd and the Referron team kept the stand busy, most new customers were spreading the app from person to person. One advocate at the show proclaimed that referron is the social referral revolution!

Showing off what the app does best, co-founder and VC Ivan Kaye, walked around and met businesses with one question: ‘Who can I refer you to?’, and with Referron, he was able to connect his contacts with those businesses in seconds! “Referron is truly a game changer!” Said Kaye

Financial Planner Chris Magnus, one of Referron’s early adopters, said: “Referron has been a fantastic tool for my business. It has enabled me to receive leads from trusted sources which have so far added $20,000 of revenue in just 1 month!”

The app is free for anyone to download and begin referring, those who receive referrals can receive three free per month. Businesses can subscribe to unlimited referrals and online management tools for as little as $20 per month. Planned developments for Referron over the next few months include new social networking integration, messaging and business CRM integration.

It will be interesting to see the way the guys choose to grow the database of users, networking events in the business space seem to be working well so far, I guess it’s going to be a case of avid users adopting the app as a lead generation firehose and the team capitalising on these stories attracting the mainstream corporate space to the mix.

Previous article Factoring on the rise as businesses seek cash relief
Next article Pay your taxes, don’t hang out with terrorists. She’ll be right.
Via Profiles
Tags AppgrowthMobilereferronstartupstodd heslin