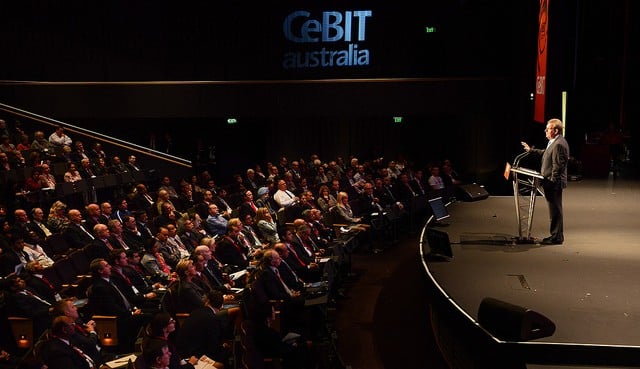 They may have been given the shitty end of the showroom absent of the signature red pathways of the main hall, as well as the make shift cafe, but that did not stop the CeBit Startup section from being the area where all the exhibitor action was happening yesterday. Whilst the main floor boasted beautiful stands and cutting edge technology and services, it also was full of sales people. Now I DO get these events and the fact they ARE about selling shit – I am a sales person through and through. BUT the big difference between the CeBit Startup stands to others I spoke with in the main hall was the passionate story telling.

There is a lesson in that for the other companies at CeBit, buyers purchase why we do what we do, as much as they purchase what we can do for them. That is the primary reason that Startups were winning left, right and centre. Vimily who are running video interviews with their recently pivoted video made easy for business offering were literally swamped at their stand making appointments and collecting names and numbers like the hustlers they are. Sebastien Eckersley-Maslin founder of Bluechilli who had an entourage of startups from their incubator at the event stated that he was impressed with the reaction startups were receiving and the startups they had there all looked like they would make a return on investment from the event.

Winner of SydStart 2013, Critical Arc decided to fly solo today at the event, which meant at stages he literally had lines of people from a range of industries chomping at the bit to speak to him, and again said he was impressed with the quality of leads he was getting. Another startup even had two offers from investors on the spot for their new app which was just launched two months ago. Even myself as a publisher has set up two meetings for the next two weeks to engage the services of two new companies there to help propel aspects of our business here.

Although when I first heard that CeBit were doing a Startup Conference I was a little bit annoyed because I am a SydStart loyalist, my opinion now is that there is actually a need for both events to occur, where SydStart focuses on the community, learning, capital raising and growth. CeBit provided startups to connect with Big Business and Internationals that are drawn to town because of the size of the event, it acted as a lead generation tool [especially for B2B startups] and encouraged founders of tech companies to sell the old way, face to face and on the spot objection handling and I am a huge bloody fan of that.

Previous article We need to get ism’s out of the Startup space
Next article Fishburners to host top coding contest: Codehire Cup
Via Profiles
Tags AustraliaCeBitconferencestartupsSydstart