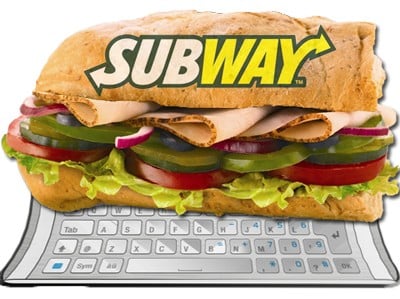 I wish that I had taken actual screen shots to show you some examples in this piece of what I am going to be talking about. Unfortunately I relied on embed codes and the account has now been suspended. But yesterday Subway Australia had a bit of a situation happening on social media – and to use a bad pun they were in a bit of a pickle.

Someone had made a parody account going by the moniker @SubwayAU and was tweeting out [kind of hilarious] boganisms [yes I made that word up] such as “What’s up c__ts? Eat Fresh”  ” Get a big subway into ya” and other phrases that don’t really fit within the official Subway Branding. Needless to say, the official Subway and hundreds of foot long lovers from around the country rallied together to report the account and now it has been suspended.

In this instance the result has been good for the company, and on it’s side Subway has a huge customer base and global brand recognition. But what if Subway was still a startup with a couple of unknown stores to the wider public. What would happen if someone started to imitate your brand and company on the internet. How should you handle that situation?

The first thing that we need to think about when we are starting a company, is how are we going to protect the brand from people that may want to piggy back or troll us when we are starting to grow.  At the beginning it was important for us to purchase a range of “shoestring” related domains and twitter handles not to use all of them, but to avoid others from using them, we are lucky that the type of brand we are is probably not a prime troll target, but you can never be too careful when it comes to these things.

If it does happen though how do you handle it? It’s a tricky situation, because the number one thing that any fun loving troll loves is engagement, from my point of view Official Subway actually handled themselves quite well yesterday, they made one simple statement and did not engage the other account, instead using the opportunity to build their community of customers, most people that sent messages to their account telling them about the @SubwayAU profile, were given a personal thanks by the social media manager – which helped rally the loyal customers together.

What measures have you put in place to stop something like this happening in your business?

Update: Big Thanks to Dave Cupples who sent us in this screen shot!

Previous article Hack to the Future: Mindset or Skillset?
Next article Australian Govt censor Twitter for Australian Users
Via Other
Tags Brandsprotectionstartupssubwaytwitter