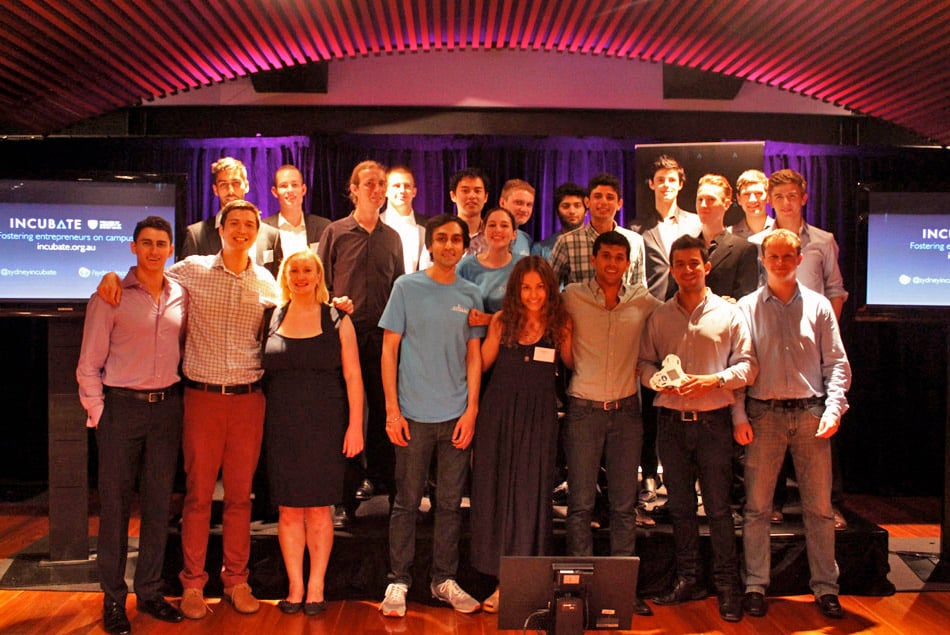 Sydney University startups who were accepted into INCUBATE’s first round were able to raise over $1 million in funding over the summer. INCUBATE (incubate.org.au) is the first student union backed startup incubation program in the Asia Pacific and provides young entrepreneurs on campus with the funding, workshops and mentoring to make their business idea a success.

Demo Day was held last month where a full house of investors, industry leaders and the university community gathered to hear the pitches of the first eight INCUBATE startups. The teams had spent 11 weeks of the summer working against the clock to be ready for this chance to showcase what could potentially become a multi-billion dollar business for the founders.

“The Demo Day presentations blew the roof off. The quality of the startups was superior, in my opinion, to the very best coming out of an incubator like YCombinator in the USA,” said Matt Barrie, Australian entrepreneur and CEO of Freelancer.com.

Randal Leeb-Du Toit, INCUBATE mentor and Head of Commercialisation at the University of Sydney agrees with Barrie. “On all counts, as a pilot, INCUBATE has exceeded my expectations. There’s no need to go to Silicon Valley to find world-class technologists and aspiring entrepreneurs – they’re right here in Sydney and on campus.”

Whitney Komor, founder of one of the INCUBATE startups called TheBestDay, successfully raised just over $1 million at the end of 2012 in a Series A funding round. She now has four emp and plans to release her new online social planning tool in April 2013. “We have several major Australian business partners already on board. Businesses want to make it easy for their customers to organise group bookings so we have developed a simple ‘plan’ widget that allows their customers to instantly put their plans into action”.

Georgia Kia, founder of WeSit – an online babysitting service – has successfully secured a major partner. “We pitched the idea to BlackBerry and they were so impressed they wanted to fund the development of our app for BlackBerry World.”  Georgia received $20,000 in funding from Research in Motion and now WeSit will be a part of the official BlackBerry 10 launch, as well as a featured app on their app store.

INCUBATE Director, James Alexander, explains that not all students or graduates want to go into a graduate program when they finish university and part of INCUBATE’s success has been based on this realisation. “Starting your own or helping another young entrepreneur build a successful business can create so much value for our economy. We’re encouraging young entrepreneurs to start new global businesses here, in Australia.”