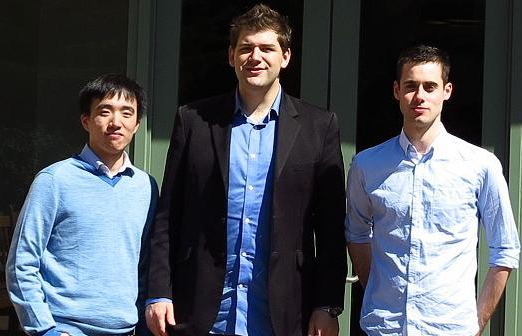 Melbourne-based 121Cast, founded exactly a year ago in February 2012, have been making waves with the release of SoundGecko.

The brainchild of Long Zheng (24), Andrew Armstrong (26) and Ed Hooper (27), the app that lets you listen to any website and article on the go, whether on a website or smart-phone. It also allows you to synchronise with your Dropbox for easy listening later.

While one might be forgiven for thinking that the founders of the Melbourne based 121Cast might have faced some challenges based on their age, Ed Hooper, who we caught up with, insists that that this was never an issue due to their previous involvement in successful start-ups.

Long created istartedsomething.com at the tender age of 17, a blog about Microsoft technologies that went on to reach over half a million hits per month. The feather in Andrew’s cap was the design of Telstra’s Bigpond Music website while Ed had been involved with several start-ups including rome2rio and SOAK.

Riding this wave of momentum, SoundGecko, the beta of which was launched in mid-2012, has gone on to attract more than 75,000 users and the attention of Melbourne’s Adventure Capital and Innov8, the seed funding partnership between SingTel and Optus.

121Cast was the first Australian start-up, along with VenueMob, to receive investment from seed program Optus-Innov8 back in November. Optus-Innov8, which represents a partnership between SingTel and the Australian telco, also opens doors to mentorship and gives 121Cast exposure to both telecommunications networks huge subscriber base.

Ed tells us that the three key factors that got them on board with Optus-Innov8 were the traction of the existing SoundGecko beta, strong strategic alignment with both Optus and SingTel and the quality of the team, who, as indicated earlier, are no newbies to the start-up game.

While it is true that time poor people might prefer to quickly skim articles and extract only what’s relevant to them (as opposed to listen to an entire article,) SoundGecko affords the same time poor people the opportunity to listen to articles and stay on top of things when they usually can’t read – in the car, on a morning jog, while walking to a client site or perhaps when preparing dinner…

The width and breadth of opportunity presented by SoundGecko also saw 121Cast get green-lighted for a place in the Melbourne Accelerator Program (MAP), the University of Melbourne’s new program set up to assist start-ups with a connection to the University, be it as existing students or alumni.

“Being part of the MAP was a fantastic opportunity that I would recommend all start-ups with a connection to the University pursue”, says Ed. “One of the benefits that I really found helpful was connecting with alumni who gave us advice on key challenges our business was facing.”

The first iteration of the program turned out to be more successful than anybody anticipated with two teams raising investment and one winning a competitive award (out of four in total).

It no doubt helped that the trio have a strong connection to higher learning, having completed degrees and courses at Stanford University and the universities of Monash and Melbourne. While the high college drop-out story is a popular one with tech start-ups, Ed feels that in his case, university was very useful on his start-up journey and gave him great insights, experience and connections. However, he maintains the choice of whether to study or not depends on the individual.

“Hungry entrepreneurs should focus on which of the opportunities available to them will provide the best learning experiences. For some it will be study and for others it will be a hands-on opportunity.”

Despite what appears to be an impressive run of good fortune, built on a foundation of hard work, start-up life has not been without its challenges for the young trio.

“The technology behind our platform is very complex which made it really hard to create an accurate prototype quickly.” This was a primary reason for releasing the SoundGecko beta, says Ed.

In addition to wrestling with technology, a lifestyle shift also presented challenges. “Transitioning from high paying salaries to living off our own personal savings was a tough change to make. We all agreed that the team and idea were solid and that going all out was the best way to move forward which meant quitting our jobs. After raising two rounds of capital we’ve started paying ourselves however the amount is very low to cover basics like rent and food.”

The aforementioned high paying salaries came in enterprise at the likes of banking behemoth ANZ and it no doubt took a lot of courage to leave the security of a salary behind and roll the dice on a business idea.

Ed says that the fast pace of start-ups, working on a broad set of tasks and being in control of his destiny are what attracted him to entrepreneurship and got him to graciously jump off the corporate ladder. “When I worked in Corporate at ANZ, I was exposed to great projects but got frustrated that they took years to implement and were controlled by politics”, says Ed.

Demonstrating the foresight of many a successful entrepreneur, he laments that “I still to this day remember getting chewed out in late 2009 for saying Android was going to be huge and that we needed to start working on a personal banking app right away”.

Sure enough, fast forward four years and banks are now jostling for position in the Android (and iOS) markets, on a quest to provide the best integrated online and mobile user experience.

It’s blatantly obvious to anybody who has seen the 121Cast team present, such as at the recent Innov8 seed funding information session at Melbourne’s York Butter Factory co-working space, that they all have distinctly different personalities. Ed sees this as a positive. “We all have our own perception on things which makes the collective stronger. It also comes in handy as some tasks are performed better by certain personalities”.

Like most, when pressed on the threats and challenges facing Australian startups, Ed sees funding as the number one hurdle. “Australians (are) moving off-shore because they are unable to locally raise capital or do not view Australia as a viable location for starting a company”.

These hurdles have hardly stopped 121Cast from chasing their dreams though, and if the performance of a company still in its relative infancy is anything to go by, we should be hearing a lot more from them in the coming months and years.

121Cast ultimately seek to redefine the radio with personalised information and entertainment for all. Imagine turning on the radio, hearing about how your stock portfolio has performed, listening to news that directly relates to your interests and profession and then banging out a brand new track from your favourite artist? I’d tune into that.

To find out more head to www.121cast.com

1.     Traction in the shape of existing customers (preferably paying ones), a quality team and strategic alignment are almost critical to being considered by serious investors
2.     Entrepreneurs should focus on the best learning opportunities available to them, whether study or hands-on experience opportunity.”
3.     Start-ups should pay themselves only a modest salary to ensure funds are invested in the growth of the business and its founders stay hungry
4.     If feasible and you truly believe in your idea and team, consider quitting your day-job so you can focus on your start-up fulltime (lifestyle shift imminent!)
5.     Don’t let geography, funding or age limit your ambitions, actions or success
6.     Different personalities provide different perspectives and can help drive business forward
7.     Overcome technology hurdles by focusing on lean functional versions and subsequently make iterative improvements
8.     Be aware of and seek out start-up programs that are available to you
9.     Seek mentorship (121Cast receive formal advice from Adventure Capital which brings experience and expertise to the table that the core team doesn’t have)