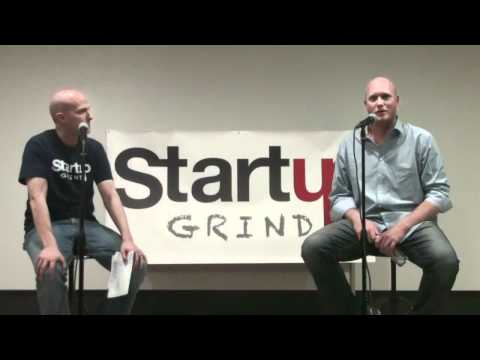 Startup Grind, the community of founders, entrepreneurs and ‘wantrapreneurs’, was established in February 2010 in Silicon Valley, by Derek Andersen of RedCommand and TechCrunch fame. The Grind has since expanded rapidly and now has 36 chapters ranging from places such as LA, New York and London to Budapest, Guangzhou, Tel Aviv and most recently, Melbourne.

Shoestring caught up with the Melbourne chapter Director Chris Joannou (not to be mistaken with the bass player from rockers Silverchair), a serial entrepreneur in his own right with interests in everything from Tech to Tequila.

Chris tells us that Startup Grind is essentially “a fireside chat series where each country plays host to the best in local tech talent, presenting the amazing stories of founders of the best startup companies around the world”.

The Melbourne chapter recently hosted their Christmas party where Adioso’s Tom Howard gave a talk on the company’s struggles. With so many co-working spaces, startup events and networking functions, Chris maintains that what sets Startup Grind apart is that there is something special in hearing how companies like Adioso, Xero (online accounting software) and Zwift (online restaurant ordering solutions) started, raised capital, and overcame the hurdles that we all seem to face as entrepreneurs.

Melbournian entrepreneurs can look forward to seeing the best Melbourne has to offer being brought to the stage in 2013. The chapter will also continue to promote Australian talent to the global community using the Startup grind network. A network, Chris tells us, that is committed to improving and harnessing a network of entrepreneurs that are proud to be part of the ‘Grind’.

And with so many existing and emerging challenges facing entrepreneurs, particularly in this sunburnt land of ours, the Grind offers startups yet another avenue for a leg up. Chris is not alone in thinking that the big challenge facing startups in Australia is local funding.

“It is a problem when the most successful Australian Startups all become exports. In terms of challenges for 2013 I would say international competition, particularly from India and China.  I think this again comes down to funding. If you had your chance to invest in a startup that was starting to see traction in Australia or China, which would you invest in when you consider scalability?” says Chris.

Indeed funding was the key issue singled out in Deloitte’s Silicon Beach report, particularly at the scaling stage where American startups raise 100 times more capital than their Australian peers.

In addition, Chris reflects on his own personal lessons learned when assessing challenges that face entrepreneurs. Like many, Chris has previously been guilty of building businesses based on an idea rather than and says that taking the time to find a clever way to validate your idea before investing time and money is the way to go.

“There are a number of people out there that are not thinking about a legitimate business model, aiming for a million users and selling advertising is something that does not work. Investors want to see paying customers and need you to clearly articulate how you will make money from the offset.”

No doubt having access to the Melbourne and worldwide Grind community will offer budding entrepreneurs the opportunity to develop the right contacts and acquire the knowledge and tools to be able to more effectively validate ideas and generate business models without burning time or money.

On Melbourne, which was recently ranked 18th in the world by Startup Genome, Chris agrees that the city is on the right track. “Co-working spaces, accelerator programs, and networking events are the perfect foundation for any eco-system and the increase in university based startup initiatives that started to take place in 2012 are another indication that we are on the right track.”

He also believes that service businesses, designed to make your life easier, will lead the way in 2013. Think personal assistants, doctor’s appointments, grocery shopping and getting a taxi.

“I would also look at smart companies that are starting to think about the next wave of applications in the augmented reality space, particularly with the impact of Google’s Project Glass. Starting to think about how your startup will look and operate in this space is essential for 2013.”

Startup Grind has chapters in both Melbourne and Sydney. To find out more about coming events head to StartupGrind.com

Chris Joannou also runs the Melbourne Internet Business Group and Startup Lab Australia, contributes to Tech Cocktail and operates DreamPushers, a digital lifestyle magazine which will this year be used as a vehicle for three major Kickstarter projects and will also launch its online store.

Previous article Tools of the Trade: Guide to Finance Basics
Next article “overqualified” – what does that even mean?
Via Insights
Tags chris joannouentrepreneursMelbournestartup grindstartups