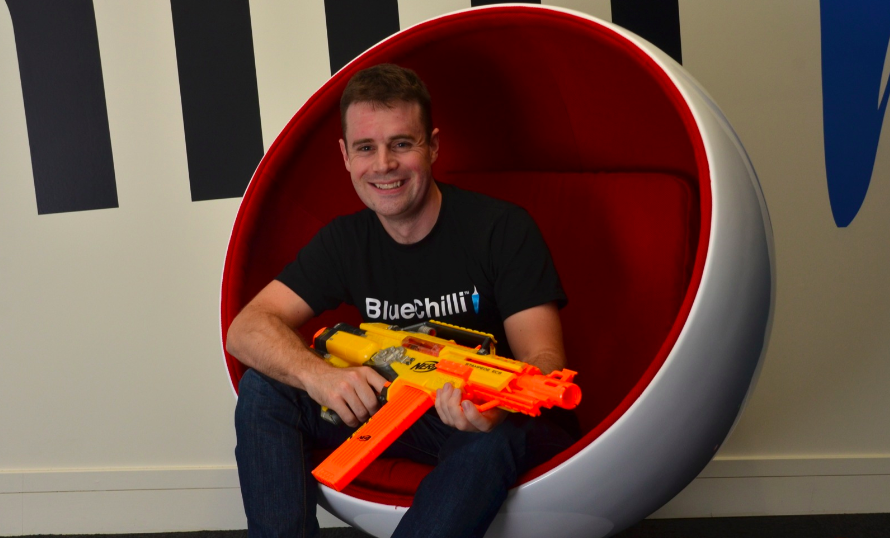 He was three from the front of a line about to enrol into University down in Tasmania when he got the phone call that ADFA were taking more students on and were offering him a place in the Navy. Three days later he was in Canberra thrown into a highly disciplined environment, being yelled out with gun in hand and studying how to engineer weapons to protect our nation. From being one of the youngest people ever to oversea the creation of new massive warships for Australia, to building and selling his first  tech venture before he left the navy, Sebastien Eckersley-Maslin has a story that is both both entertaining and inspiring.

His first ever business was down the beach in Tasmania where he grew up, he was 9 years old and it was called Sunscreen Squirts – he had “acquired” his mothers family value pack of lotion and was selling squirts at 50 cents a squirt. Probably not the kind of business that would bode him well now, but reflects that being allowed to do things like these as a child by his parents taught him how to experiment, how to be creative and most importantly how to fail.

He wanted to be an astronaut as a young guy and recalls being a space nerd, in grade 4 he had his career mapped out for him, he was going to join the airforce, become a top gun pilot, transfer to the US, transfer to space command over at NASA and become a captain of a space of shuttle. The grand vision was to be the first person to command a space shuttle to Mars and he had worked out  that at the rate the space program was travelling this mission should take place sometime between him turning 35 and 40 years old or in around 5 years time.

Sebastien disliked school, and although was quite good in assessments he disliked the institutionalised way of learning. It is obvious to anyone that meets Sebastian that he has a crazy level of intelligence and because school was pretty easy for him he tended to muck around a bit. Kinaesthetic learning was more his style and throughout his school years he was heavily into sport, including competitive mountain biking in which he represented at various state and national championships.

Straight after high school after having some conversations with some friends, he applied to join the navy, but missed out due to them limiting their intake. He was 3 from the front of the line at university to enrol in a course on bio medical engineering when the recruiters of the Defence Force called and said they were increasing their intake and would like to offer him a postion, he said yes. That was the Friday, on the Monday he found himself in Canberra in a new world of strict rules and discipline.

Sebastien says  that ADFA was great for him, it beat a new kind of discipline into him, and taught him things about structure, which today are evident in the way he has set up his current business. After he finished his degree, Sebastien spent two years training how to apply all the theory around weapons systems and engineering of the war ships, he says that the mentoring environment within the Navy was great and very well put together recalling his experience of being sent out on his first ship to learn the job that he would then be expected to replace the person that was currently doing it.

He then managed to get himself a promotion way above his rank with the Air Warfare Destroyer Project, a massive multi-billion dollar project with a lot of responsibility thrust upon him and the weight of the commonwealth on his shoulders meaning he needed to get it right. Out of all the experiences we talk about regarding his 10 year career in the Navy the one that stands out is his experience of the team he worked with in Iraq and the fact that in such a high pressure environment with a high risk of failure, you get to know your team so deeply and intimately that you begin operating as one organism or a machine, and whenever a stressful situation occurs, you know that orders and instructions will be followed implicitly. He reflects that he will probably never experience that level of unique team work again.

Whilst he was in the Navy he built and sold 199 Query, a question and answer service. Around the time Dominic Carosa had just bought 199 Bongo and Sebastien sent him an email upon returning from Iraq saying: “Dom, I see you have bought my competitor, how about you buy me out, before I buy you out?” – Cheeky? Yes. But was obviously the right trigger to get his attention and within four weeks he had purchased 199 Query and added it under the Bongo brand. The two both have a great business relationship to this very day.

His current venture Bluechilli is a services firm that has a big goal – to launch 100 startups in 5 years. The company started off completely bootstrapped using leverage to bring on clients and build great projects, they built themselves a great reputation and expanded the team, it wasn’t all smooth sailing though, there was a period throughout 2011 where the company was chewing through a lot of money, to the point where Sebastien had to look at the possibility of cutting costs, unsure whether that may even mean going without a wage in order to make sure he could pay his staff.

He says that throughout this time, there was some very tense board meetings, where he basically just “assumed position” in the board room, ready to take it. Lesson’s learnt and a small amount of investment from Future Capital, allowed him to take Bluechilli to the place that it is right now, hire a sales director, move into a new premises and gave him the resource to be able to put in place a great management infrastructure.

The beauty with Bluechilli is that Sebastien gets to  be involved in many businesses on a daily basis, he plays in new markets and industries and new CEO’s everyday. Bluechilli is doing exactly what he experienced in the Navy – owning the end to end supply chain when it comes to building great startups. From capital raising, to having a team of Directors in Marketing, Finance etc that work across the various startups in the portfolio to give them what they need in their early stages, it is clear that he is trying to create an environment that is one of a kind, most certainly in Australia, but also the world.

And as for the flip? Well as he so eloquently put it to me, if he really wants to build a tech idea he has, he has all the resources to do so right at his finger tips.