“overqualified” – what does that even mean? 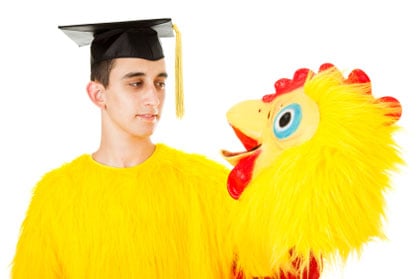 It was a Tuesday morning when deliverance came.  I had just been dealt a particularly brutal blow by an organisation I was dying to work for after making it to the second round of interviews.  I was at my wits end by that point. I had heard everything from ‘not enough work experience,’ to ‘a better candidate was suited for the position’, to…well, no response at all where your application falls into a black hole somewhere, to—this just in—“overqualified” (and what the heck does that mean!?).  And then suddenly it happened.  An employer was calling about an application I had filled out months ago, one of those “we’re not hiring, but we always accept applications” kind of things. Two weeks later I was hired and the six months I had spent working retail, feeling demeaned and obsessing over job applications had finally come to an end.

Life is tough for the recent graduate. It seems like no one is willing to even give you a chance to prove yourself. And with so many job candidates out there you’re competing with, why should they?  But trust me, having a chip on your shoulder won’t help you get the job you’re after—in fact it will probably guarantee that you don’t get it. Take ownership of the situation you’re in, whatever the reason and do a bit of self-evaluation. Sometimes we get so tired of looking at job application materials that everything looks the same.  It’s only when we take a step back we can see that perhaps we haven’t done everything possible to make our application stand out from the crowd or market ourselves in the best way possible.

The fact is that everyone I know who has been out of a job and actually looking for one (however long it took), eventually found one if they kept searching.  One friend found a really cool traveling job teaching reading to adults after substituting for several months at a nearby school; another worked at all kinds of temporary or seasonal jobs—taking over for a teacher who went on maternity leave for a semester, working at a restaurant and then directing a summer camp until finally landing a full-time, salaried position; another friend found two part-time jobs substitute teaching and directing youth ministry in order to get enough work.  Another friend took on an internship to gain experience in her field after being unemployed for a few months, then landed a full-time position through networking in her field.  Even a family friend working in the entertainment industry eventually found a job simply by continuing to call his connections in the business and making monthly visits to a couple of the companies he had previously worked with.

The point is—a job will come eventually. On a day when you least expect it, your self-confidence is in the gutter and you’ve just about given up, you’ll get that call saying you’ve finally landed the position.  All you have to do is keep trying, change up your tactics and do whatever you can to keep moving forward.

“Many of life’s failures are people who did not realise how close they were to success when they gave up.”  – Thomas Edison