I prefer Congruency to Back Peddling 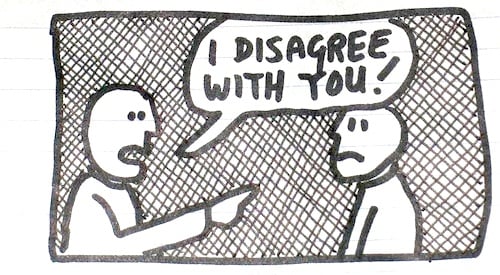 If there is one thing that is certain in our society, it’s the fact that everyone has an opinion, and we are entitled to express it. If people disagree with that opinion they in turn are entitled to express that. When opinions are given in forums by people who may have a public profile, we see people expressing their opposing opinions on a grander scale such as protest, petition or demonstration – all of which are perfectly legal and acceptable ways to get their point across.

When it comes to being offended or disagreeing with a certain view there is something that grinds my goat more than the story saturating the media for the next week, and that is people that give an opinion about something, that represents their personal views, who then by either their own accord or from professional pressure issue’s an apology or back tracks what they said.

Watching the Kochie breastfeeding saga over the last couple of days has been quite interesting, and when challenged on air and was requested to make an apology by protest organiser Amy Ahearn, I have to say that I really admired the fact that he stood by what he originally said and was prepared to wear the labels being hurled towards him.

There will be many people out there that will disagree and be offended by what you say in life, the key is to learn the difference between what an opinion is and what constitutes bullying and being put down. At the end of the day though YOU are the one that chooses how you react to an opinion or comment. Likewise for something you see happening that you may disagree with.

For us as entrepreneurs our greatest let down can be not having congruency between ourselves and our businesses. This can let a lot of people down, because it is extraordinarily difficult to start a business and act like a completely different character for the next 5 years whilst you build that business. Because of this, I feel that the world genuinely misses out on having a lot of truly fantastic people share their opinions publicly in debate for fear of what it may do to their business. Each to their own, but one of the things that I strive for in our business is to talk to you as I would talk to my business partner, my flatmate, my friends and people I am just meeting for the first time. Congruency is easy. Congruency allows you to grow a likeminded base of customers.

Congruency might be easy, but remaining true to your opinion and stance on something can be very very hard. Sometimes the calm route is to bow out quietly, especially if your view is not that of the majority. When I was working in my corporate role as a sales manager, I had a situation that caused a mini-war throughout the company, and I was on the end of the argument that represented the minority, I was respectful and professional in my views, but I know for a fact that people were offended, HR at an international level had to get involved. [If you are a parent with young kids, feel free to blast away after reading this next bit]

The company was very flexible and parent friendly – this environment is one of the things that made me stay with them for so long. I was one of the youngest staff members in Australia and the youngest manager for a complete line of business at the company, and part of my success with my team was making sure that we had a family first culture. If your child was sick, go pick them up from school, if they were getting an award at school come in at 10am after the assembly – I held then and still hold now that an employee is much more productive after all the needs surrounding their family have been fulfilled. I will always have this culture within any business or team I run.

Over time throughout the whole company, a culture developed where people would start bringing their children or grandkids into the office. It was present across all levels of the company. This was something that I was definitely not ok with. Children running around screaming when clients came in, getting restless and bored sitting at a desk next to their parents for 8 hours [who can blame them] and in a lot of cases representing a risk to the business, like the time I saw the four year old chatting with the contractor that waters the plants in the building, on a different [and empty] level of the business, out of sight from everyone. Call me paranoid, but how well do you really know people, anything could have happened.

My opinion was clear, our offices did not have the facilities to cater for children in the workplace, therefore children should not be bought into the workplace. Having three mothers on my own team [my best sales people actually] it was clear to me that when their children were at work they were less productive, because they were more worried about where they were, who they were annoying, whether they were occupied and if they were safe in this new environment, full of hundreds of people taking care of thousands of clients.

I was scowled at, labelled someone that disliked children, dragged into HR – the works. People can be particularly “pitchfork and hangman noose” when they think you are having a go at their kids, or feel as a result of that opinion they are not being a good parent. I could have thrown my hands up, caved in and said sorry. But that would have been a lie, because my opinion still stood.

The issue was they were TRYING to be good parents AND great employees at the same time, but by doing both these things you could see the direct link between their kids being at work and them under performing. In my view they were putting the companies needs before their children. Why couldn’t they perform their role at home where it’s safer, more fun and less stressful for both of them, why should we look at who is at their desks, as opposed to who is producing the outcomes we need?

Eventually the company banned kids from coming to work. Mostly around OHS issues. For my team members this meant that sometimes it would be a work from home day because that’s just what happens when you have children I guess. I judged my sales people on their numbers, not whether they made them from home or in the work place. They never wanted to bring their kids to work in the first place. I never wanted to have their children there. At the end of the day the company was interested in making sure budgets were hit. Congruency in motion.

When you give an opinion, when you polarise people and give them an opposing perspective on anything, you are always going to have a divided audience. If that opinion means for one group of people you are an arse hole, than you are an arse hole. Own it if what you are saying is what you really think. We need more people being genuine in life and business, because in my opinion the world in general get’s less shit done because we have so many fence sitters and followers of the majority.

Previous article App Developers. The Honeymoon is over.
Next article Privacy Reforms and You
Via Insights
Tags AustraliabusinessdebateKochieopinionSay Somethingstartups