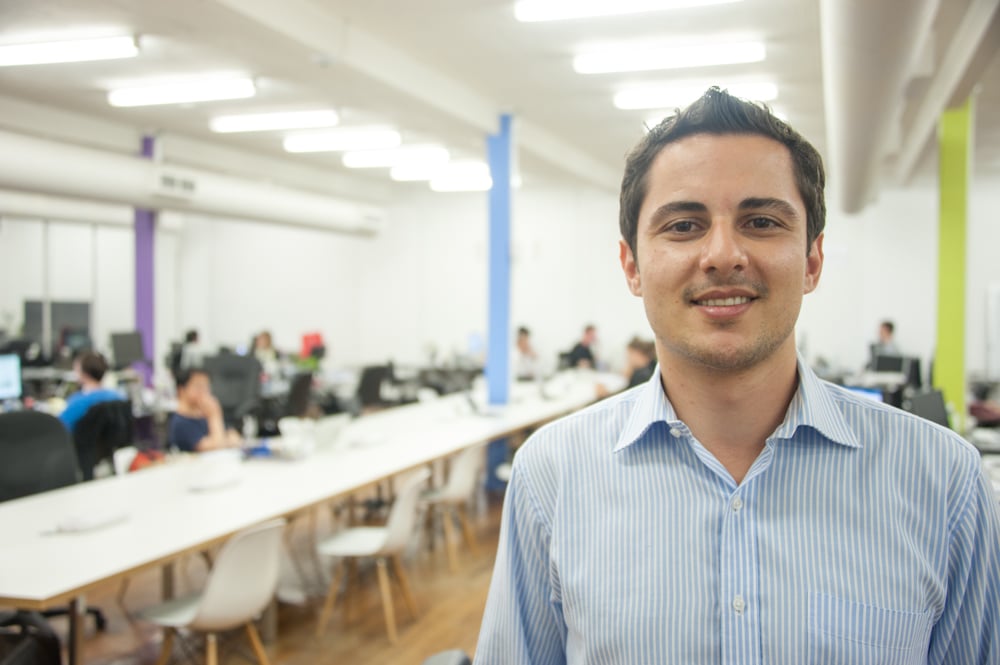 Parking in Sydney is a pain, it’s one of the few things that really detracts from our beautiful city. But it’s a problem to be expected especially since every year our population expands just that little bit more.

Rather than just being annoyed by it, Daniel Battaglia had the idea that he could do something about it and so he came up with the website Parking Made Easy.

He pitches it like this, “ So you know how parking is really hard to find, it’s expensive and there’s a constant worry of getting a parking fine? Well, parkingmadeeasy.com.au was launched in February – it’s an online car parking marketplace where people can rent unused driveways and garages. In fact, since launching the website, hundreds of users have joined and hundreds of parking spaces have been listed for rent. Parking Made Easy has been featured in the Sydney Morning Herald, ABC radio, Channel Ten and a few other places because it’s really helping to solve that community problem.”

Daniel didn’t start off as an entrepreneur, he worked in sales for companies like Coca Cola and Fairfax and then spent six years working in finance with investment banks. He is really a long way away from the finance world at this point in his life. So where did the idea spring from?

“I was travelling and I noticed that parking was a problem in a lot of cities. When I returned from travelling, I went to visit to friend and couldn’t find parking. My friend was also frustrated by the problem and so were a lot of other people I spoke with. I thought I can solve this problem and in addition help households make some extra money. I had a solution in my mind so I researched the problem further, wrote a business plan and started the website.”

“I always liked the challenge of solving problems in my studies and at work, and I wanted to solve a real world community problem.”

“The highlight so far was making that first match, having those first customers on the website find a parking space and rent it out to each other, because it just validated everything that I was doing. In many ways it’s the positive feedback from the customers that really keeps me going. .”

But though he’s optimistic, he’s still realistic about the challenges that face him ahead.

“In general, having limited resources when you’re trying to create something of value can be a hurdle. I think all entrepreneurs encounter this challenge. Having said that, I believe anything is possible and there’s a solution to every problem. I’m optimistic that all things will work out.”

You would think that a startup like Parking Made Easy would have a team of people behind the scenes but actually it’s just Daniel by himself doing everything from marketing to sales. I asked him about it and he said, “I’m working on parkingmadeeasy.com.au full time and there have been a few developers, contractors and an intern who helped along the way. Fortunately, there are also a few informal advisors and mentors who give advice when its needed.”

Media exposure is unavoidable for Parking Made Easy at this point, as a startup you can’t do without it but no-one ever tells you how to control it. Daniel was surprised by all of the attention he’s gotten and still is. He’s been regularly featured in the Sydney Morning Herald and has even had interviews on Channel Ten’s Breakfast Show and ABC Radio.

Initially I got some exposure in May, I reached out to a journalist at the Sydney Morning Herald and told them about the community problem I was trying to solve to raise awareness about sharing parking spaces. Since then Parking Made Easy has also been on Ninemsn, Startupsmart and a few other places. Some journalists have contacted me and it’s become a two way relationship. If I have some thing interesting to say I reach out to them and others reach out to me. ”

But of course, Parking made Easy has hit upon a hot button topic that everyone can empathise with. It may not be that easy for other startups to achieve that same sense of publicity.

Daniel replies “A lot of people think it’s an interesting idea, but it’s also a genuine public problem andparkingmadeeasy.com.au offers a genuine win-win solution. It can work for all startups. Another hot topic for media is startups and technology, so it’s related to topics which are quite popular at the moment with media

Like a lot of  the startup community, Daniel started working from Fishburners and he is nothing but appreciative about the time he spent there, “ My startup experience has been a bit like a roller coaster ride, a few ups and a few downs but really exciting, being part of Fishburners.org has been great. Fishburners is a co-working space for tech entrepreneurs with a collaborative community. In the Australian startup space, everyone is very positive and people have a can-do attitude , they never say can’t, it’s always how can we do this? Let’s find a solution to that.. “

Do you have any last words for startups who want to follow in your footsteps?

“Surround yourself with smart people, be patient because things can take time and persevere – so three P’s, people, patience and perseverance. These are the things that helped me a lot.

Follow your dreams and be happy with whatever you’re doing. You only live once so enjoy it, if you’ve got something you want to do, go for it. And of course, remember to use parkingmadeeasy.com.au! “