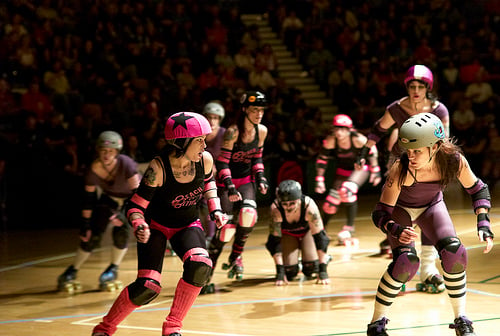 So, I’ve been hiding something from you all. And it’s gotten to the point where if I don’t tell you the truth, I just don’t know how I’ll be able to look at myself in the mirror anymore.

You see the truth is – I suck.

I mean, I REALLY suck.

And I’ve been embarrassed to admit it.

But it’s time to own the truth.

I started Roller Derby in June of this year. I’d never roller skated before my first night of fresh meat … I had zero idea of how HARD it really was … for the first session, I hung on to the side in my mental rentals, scared to death of falling over. During the second session things actually got WORSE … I didn’t think it would have been possible to suck more, but somehow I managed it … on my second lap of the rink (some 15 minutes in) I very seriously considered leaving. I was almost in tears – I just felt like a total idiot, with all of these awesome, hot, kickarse chicks I admired so much skating around me. But I held on.

I’d like to say that this is a story of triumph – that I can now say I’m the greatest skater in the world and I rock … and in fact, my plan had been NOT to tell this story until that was the case. Story of triumph – Leela wins!

The fact is, it’s 6 months later and I’m still in Fresh Meat. Everyone I started with has either gone up a level (white star) or dropped out.

I cried. Not from sadness – from pure frustration.

It’s not like I’m not trying – I skate 3-4 times a week. My awesome PA Sarah, who many of you know, is a Derby girl and goes skating with me on Wednesdays, helping me with SO much stuff.

But I’m STILL not there.

And it’s embarrassing. And it sucks.

And then I feel dumb for being embarrassed because all of the derby girls are SUPER awesome and nice and supportive  –  no one gives me shit for sucking … quite the opposite – they’re SO helpful and supportive and loving.

I’ll admit – I’ve even thought about quitting. I’ve come up with a bunch of really good justifications that would allow me to walk away really easily.

My way of dealing with it has been to go all Leela on it – “RIGHT! THAT’S IT! I WILL PASS THE NEXT TEST!” – FOCUS FOCUS FOCUS – WORK WORK WORK – HUSTLE, BITCHES!!!!

Because that’s GOT to do it, right?

But I have a few physical limitations – years of sitting at my desk for 120 hours have screwed my mobility. I’m working on that with the awesome Bianca – but it’s not just a case of mind over matter. There are some things that are going to take me time to get better at, no matter how hard I push.

And then after my PT session this morning, after whinging about how much I suck, after feeling embarrassed for sucking so much, after berating myself about all the stuff I could have done better …

And I realised I had to be grateful.

My Skating Suckyness is a huge gift.

It’s shown me a huge chink in my armour.

My frustration is just a reflection of the comfort zone I’ve allowed myself to wallow in – hey! I’m good at business! Everything else doesn’t count!

It’s an attitude that’s annoyed me in others (no way! There was a MIRROR?!?) – particularly PTs I know who’ve had the attitude of “I’m fit – I don’t need to be good at business!”.

So I admit it.

I SUCK at Skating.

But I’m getting better every day.

Every time I strap on those skates.

Every time I work out.

Every time I brave dealing with my own brain and turning up to training, even though I feel embarrassed.

I will not quit.

I will own this shit.

But – mainly, I will own and take control of my emotions around it.

I will see the mirror, I will happily and gratefully accept the gift.

And I will accept that deserving it is about more than just doing the physical work – it’s also about doing the emotional, mental and spiritual work.

How can you be immensely grateful for it?