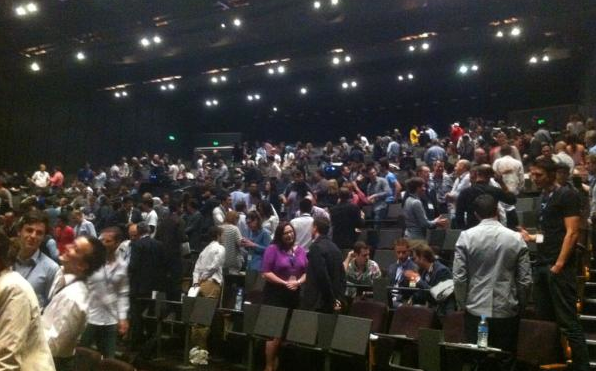 Darling Harbour was buzzing yesterday with over 1000 startups, would be entrepreneurs, social change agents and investors yesterday for the 2012 Sydstart event – Australia’s largest professional Startup Expo and Conference.

Things kicked off with a panel discussion from people that had done “stuff” – Mike Cannon Brookes [Atlassian] Dominic O’Hanlon  [Investor] and Andrew Rogers [Anchor.com.au] all joined Peter Cooper [founder, Sydstart] on stage. One of the big take aways was the focus on having the right team in place and focusing on the customer and what they want as being the key drivers to success. It was also interesting to note that of all the Australian founded relatively new companies doing north of 100 million dollars per year, of which there are 10 of them, that all 10 are actually B2B and not B2C – posing the question, although as a startup community we are launching way more B2C companies, are we actually better at building strong B2B businesses?

Next up was Mick Liubinskas from Pollenizer who gave the audience a hilarious insight into the startup community in Australia vs Silicon Valley – an energising and refreshing talk that not only entertained but also inspired those in the room that “hadn’t launched their business yet” to DO IT TOMORROW. Next up was Alec Lynch from Design Crowd who spoke about his companies journey, their phenomenal growth and the different ways in which people unexpectedly began to use their technology to get themselves tattoos designed among other things. Matt Barrie was a hit as expected with a very clear message There has NEVER been a better time to start a business. His talk clearly demonstrated how every industry was now online, and how access to outsourcing in a way never available before, has allowed people to start a business on $500 – something impossible 10 years ago. It was also extremely interesting to see how Freelancer.com actually saves lives of the people in the outsourced countries, giving people better lives, allowing them to start their own businesses, employ others and contribute to that countries economy.

From the talks it was also interesting to note that per capita, Australia has the most incubators perhaps globally and that this is a very strong sign of the amount of support for the Aussie Startup community – Support which is only growing each week.

Next up Bill Tai – Prominent US based investor in well known companies such as TweetDeck and Tango gave the crowd an insight into how being an entrepreneur was similar to Kite Surfing, one of his favourite things to do – in fact he loves it so much he founded MaiTai a kite surfing / startup pitching event in Hawaii each year. He also talked about OzApp, the search for Australia’s “Mark Zuckerberg”  or next big thing of which entries are still open and details are here for interested parties.

Perhaps one of my favourite talks of the day was by ShoeBoxed founder Taylor Mingo’s who had literally gotten straight off a plane from the US and on stage to do his talk on “No Bullshit PR” – it was such a great talk around how to talk and pitch yourself to the media without having to pay out huge amounts of money and from the discussions I have had with attendees, it was somewhat of a relief and revelation for them to learn about this before going out and making serious and expensive mistakes when launching their business and trying to attain coverage.

Other talks of the day were also given by Jack Delosa, Ric Richardson, Matthias Kopp and the founders of Big Commerce – Optus also announced it’s commitment to sponsoring Fishburners again for another two years and their ongoing commitment on the ground to the Australian Startup Scene.

In the afternoon, it was ALL about Pitches – a panel of judges listened to 30 pitches that were live and via video from some of Australia’s best up and coming entrepreneurs. It was truly amazing to see the calibre of the companies and the traction they had already had in their initial stages of their ventures. The winners were announced at the end of the day with the top four spots going to:

Over all the day was a packed agenda of learnings, inspiration and motivation – especially for the startups in the room, which were the majority. If I had one qualm it would be that in the speaker line up and judging panel I would have liked to have seen some female representation. Nikki Durkin from 99 dresses was lined up to speak but was unable to attend due to being overseas. It would be great to see some of our Aussie females making headlines internationally like Rebekah Campbell from Posse, Kate Kendall from The Fetch  as well as business vetrans such as Therese Reins who founded Ingeus in future line ups. Having said that, events are tough to organise, and Peter Cooper basically does this all by himself, something he mentioned he would like to step back from and hand over to around 3 people to champion in the future.

A Great event, with great people. The Sydney Startup Scene is growing – we have not seen anything yet.