Always admit when you are Wrong … 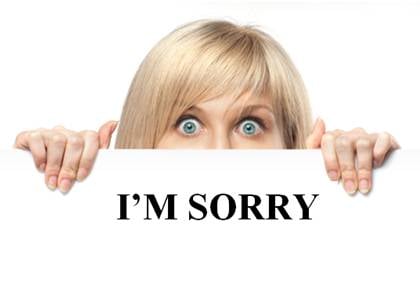 It’s never easy to admit when you are wrong, but it is a crucial step in learning, growing and improving yourself.  You can only learn from a mistake after you accept that you’ve made it.  Never blame others when you commit a mistake, because you will only end up distancing yourself from a possible learning.  The best way to handle mistakes is to deal with it and be responsible for the consequences.  Having this kind of attitude will attract learning.

Nobody likes to admit to being wrong. But, why not? There is nothing ‘wrong’ with being wrong! We all make mistakes, and you will discover many of mine in my book “From Idea to Start-Up”! The important thing about being wrong is not so much that you did the wrong thing, as it is about how you handle it. Simply put, people admire, respect, and appreciate someone that can say ‘I was wrong’. What they like even better is someone that can follow that up with the whys and how to fix the situation.

After you’ve recognised that you were wrong, the next step is to move on by doing the following:

Having the courage to admit and process your mistakes help you discover a deeper self-identity.  Learning from mistakes requires three things:

Mistakes aren’t fatal, but not learning from them could be.  Passing the blame on down the line serves nobody. Address the issue. Fix it. And move on.

Jeremy is an entrepreneurial maniac who spent 6.5 years building RioLife, a health food business he co-founded in 2004, which went on to win Australia’s fastest growing small business. Jeremy is author of “From Idea to Start-Up”, head Australian delegate to the G20 Young Entrepreneurs Summit and is now launching a range of new start-ups.