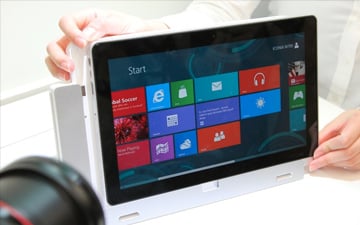 The tablet gadget category has really taken off in 2012 with the release of the “resolutionary” iPad 3 (and some amazing startup use cases of the device) and an Android army including the Asus Transformer Prime, Samsung Galaxy Tab 10.1 and the Kindle Fire. The success of the original iPad in early 2010 really signalled, combined with surging smartphone sales, a changing of the guard in terms of how we understood the definition and role of “the computer”. So where did this leave Microsoft, the creator of the world’s most popular operating system, Windows, which had up to this point been synonymous with the understanding of “the computer”?

Roughly six months after the iPad was released, Microsoft made a bold bid to claw back respect in the touchscreen space/race with Windows Phone 7, it’s answer to Apple’s iOS for iPhone and iPad. Although from then til now Microsoft has struggled to encroach the mindshare of the consumer with its Windows Phone 7 smartphone offerings, critics love the OS’s fluidity and intuitiveness, and Microsoft’s vision was finally and clearly touch-centric.

So what now? Microsoft’s new bid to assert itself as the “definer” of computer-ing will come in the form of Windows 8, which will be released officially around October this year worldwide. So what’s Windows 8 all about, how does it continue it’s touch-centric vision as posed by Windows Phone 7, and will it change the game? Products announced overnight at the Taipei Computex conference answer these three questions in vivid and exciting detail.

What is Windows 8 all about?
Microsoft has created Windows 8 to be inherently useable with the touch of a finger. How? By optimising the traditional desktop mode for finger use and by rejigging the “Start” paradigm, which will now be it’s own UI (instead of a flyout menu), very much in line with the “Metro” design language implemented in Windows Phone 7. Is there a reason traditional productive task-based computing can’t be complemented by – or enjoyed seamlessly with – media consumption computing? By having traditional “programs” as well as touch-based “apps” co-existing on one platform, and importantly on one device, Microsoft hopes to be everything to everyone.

How does Windows 8 continue it’s touch-centric vision as posed by Windows Phone 7?
The new Start screen, which comes into play when you press the Windows key on a keyboard or on the device itself (think the iPad’s Home button), is a horizontal grid of “live tiles” which are app-launching icons that display live data. For example, the live tile for Twitter might contain the latest tweets from people you follow. This is very much like Windows Phone 7, where pressing the Windows key brings up a vertical grid of “live tiles” which likewise show you glanceable information whilst also being a gateway for app-specific interaction.

Will Windows 8 change the game?
Asus and Acer, two of the most innovative and successful manufacturers of Windows-based PCs have demonstrated some very intriguing use cases for Windows 8 at Computex this year. With a hugely-improved focus on design finesse (thanks Apple!) and a multitude of form factors which truly embrace the ‘windows of opportunity’ that come with Windows 8, Microsoft could be on to a winner. As a web/graphic designer, I have longed for the day that a portable, desirable, ergonomic, graphics-tablet-in-a-computer-that-can-run-Photoshop device would materialise from my dreams and float into my palms. I’m personally excited about the possibilities with Windows 8, and tip my hat to Microsoft’s all in approach. Whether Microsoft can re-lure consumers away from the iPad/Android army to a Windows only ecosystem remains to be seen. I think I’m all in, too.

Does Windows 8 appeal to you? Why/why not?

Previous article Make the Most of Mentoring!
Next article The New Startup Airline in Town!
Via Other
Tags appleappsipadmicrosoftprogramstouchscreenwindows 8

Luke is a designer and coffee connoisseur who has always had a passion for technology. Living in Sydney's inner-west, Luke also calls the land of startups home, as a cofounder and the creative director of Shoe String. His new Tech/Gadgets series is his latest project. Follow Luke @typographicnews