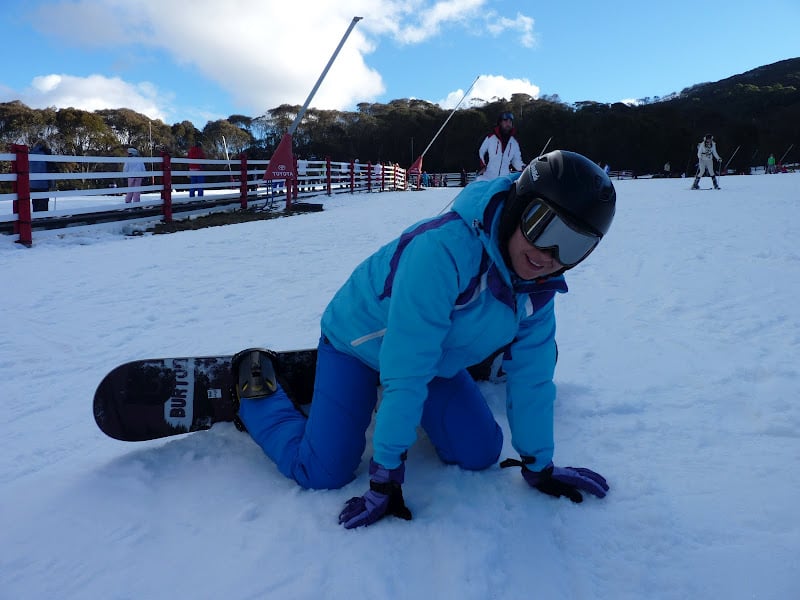 For the first time in my life, I went snowboarding to Thredbo for the season opening weekend. I was so excited about it all, especially given that I haven’t seen snow in so many years and I really started to miss it! Moreover, I’m always amused by all the beauty Australia has to offer: you can surf one day, ski the next and chill out with your mates enjoying the best coffee in between!

Initially, I wanted to ski since I had some experience with it as a child. However, I let the gear-hire-guys convince me to try snowboarding because “it is so much fun, you’ll see!” And so I got the gear and arrived to Thredbo for the weekend of my life!

I approached my snowboarding experience just like starting a new business – assuming that following on the familiar, safe approach would help me succeed. As for any startup, budget was tight, so instead of spending money on lessons (waste of money of course – as it turned out, NOT!), I spent the first night preparing by watching youtube videos on snowboarding. It looked so easy and smooth on the videos, but since I have never tried it, a lot of what they were saying did not make sense at all.

This did not break my spirit and my “Let’s do this! How hard can it be, if they can do it too?” attitude gave me confidence once again. So I got my gear on and entered the snow the following morning.  I managed to strap the board on, but to my biggest surprise as I started sliding with enormous speed – or as it felt like at that point – I freaked out so much I thought this was the end for me! Obviously, an inevitable big, painful fall on my bum followed, and my confidence was shaken. As I tried to pick myself off the ground to give it another shot, fear got the better of me and I was sure “I can’t do this! There is no way I can actually do this!”

Despite all my fears, I knew I had to make it work! There were already people I told that I will snowboard this weekend and I have never been able to face failure, disappointing people and looking like a fool. Failing was just not an option for me ever. So I tried, and tried with very little success. My frustration did not stop, and I needed to give a break to myself. As I was undoing my boots, I noticed a happy group of beginners with an instructor near me, and spent the next hour observing what they were doing (and wishing I had joined them in the first place!). I started copying them and for the first time, I had a feeling of what it’s like to snowboard! I can not even describe how much fun I was having and how quickly I picked it up from that moment on.

I suddenly believed again that I was in my full power and capable of doing anything I put my mind into! While confidently “falling leaf”-ing down the hillside, I had a thought: sometimes, we just have to believe the power in ourselves first, before we can experience it. I believe that in order to succeed in life – or in business for that matter – we need two things: 100%, unshakable trust in ourselves, and surrounding ourselves with likeminded people to learn from and have fun with to make our journey a lot more enjoyable!

Previous article New Aussie Site Forecasts Personal Cashflow!
Next article #Fail – This wouldn’t have happened if they had Bleeply…
Via Other
Tags SnowboardingwomenWomen as Entrepreneurs

Orsi Parkanyi is on a mission to change the current Australian business landscape and encourage more women to step into entrepreneurship. She is the founder of Women as Entrepreneurs which is dedicated to all the dynamic, business savvy, motivated, creative, resourceful and fabulous Australian women who are not afraid of thinking bigger and aiming higher when it comes to realising their dreams and passion.