Winners of Female Pitching Comp off to Silicon Valley! 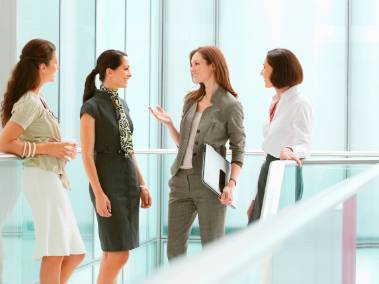 On Tuesday night 24 women pitched at the Commbank Women in Focus, Female Pitching Competition for TiECon. The comp was tough and the women were judged on their business idea, marketing potential and pitch strength. All companies were at various stages with Hire Me Up taking out the Big Gong closely followed by mmule and Style Rocks! Tenacity and a passionate belief in their business concept has won two Sydney female Entrepreneurs an invitation to the world’s largest entrepreneur’s convention, TiECON in Silicon Valley, California.
Fiona Anson, co-founder of HireMeUp.com.au, delivered the presentation that secured the top prize in TiE Sydney’s Pitching Competition for women entrepreneurs last night.

HireMeUp’s identification of and focus on the growing part time market was the clincher for the Sydney based online job board which took out the coveted first prize over women entrepreneurs from around Australia.

Co-founders Alli Baker and Fiona Anson were thrilled to win the competition which will now see them take off to Silicon Valley in California in two weeks to participate at TiECON which will open the doors for them to court some of the world’s biggest online and tech investors and venture capitalists.

The national online job board won the judges vote with their unique approach to finding part time work with their customised and world first search facility allowing users to search by the days, times and hours they need.

Borne from their frustration from trying to find work that fit around their other life obligations, Baker and Anson set about building a job site that addresses the needs of the growing part time workforce, filling a hole in the online space for a job site geared to a market that is now 35% of the workforce and growing at twice the rate of full time.

Anson puts the win down to an absolute passion about what they do and the tenacity to stay the course even when the going gets rough.  “In the last 14 months, Alli and I have worked with an absolute belief in what we’re doing, working unbelievable hours, ploughing every bit of time, energy and money we have into something we believe passionately in,” says Anson.  “Like every business, especially starts ups, we’ve had our ups and downs, but I’m privileged to work in a partnership with not only a great human being but a person who has similar goals, values, integrity and drive to me and in my book that’s a must have”.  And despite a 20 year age difference, Anson says it’s a business partnership made in heaven.

The objective of the pitching competition was to give aspiring women entrepreneurs an opportunity to learn to pitch to angel investors, build their confidence in their ideas and themselves and connect to TiE’s global network of supportive members.

Entrants were required to pitch their entrepreneurial idea in a short three-minute presentation and a two-minute Q&A to convince a panel of judges to back their idea.

The judging panel was made up of experienced TiE Charter Members, angel investors and VCs including the Commonwealth Bank’s Head of Women in Focus Katie Mihell, TiE’s Dilip Rao,and successful entrepreneurs Jennifer Zanich and Karen McFadzen who have already trodden the investor pitch path.

As part of their prize, and courtesy of TiE, Anson and Baker are now heading to Silicon Valley for TiE’s flagship TiECON conference on May 18-19, providing them with a unique opportunity to meet with angels, venture capitalists and strategic investors – and pitch their Australian based but global opportunity idea.  TiECON SV is attended by the who’s who of the Valley with several thousand delegates from around the world.

“We’re not Instagram yet,” Anson says, referring to the recent Facebook acquisition which netted the owners millions of dollars, “but watch this space!  It would be great to be Australia’s first female owned cross generational success story”.