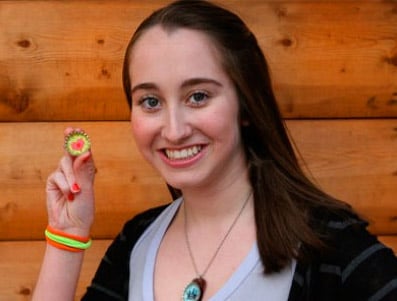 Get ready to start hearing a lot more about young entrepreneur Maddie Bradshaw. She is 16 years old and already heads up the multimillion dollar business M3 Designs which she created from her bedroom back in 2006 when she was just 10 years old!

When she started making what are now known as Snap Caps to decorate her locker, she had no idea that a few short years later her invention would snowball to a point where they would become the must have tween accessory and would be distributed across the US in over 700 stores before her 16th birthday came around.  She now sells over 50,000 necklaces a month and has just penned her first book “You can Start a Business Too!”

And she isn’t the only entrepreneur in the family – her 12 year old sister Margot, is the Vice President of the company and is behind some of the companies most popular designs.  And the amazing thing is both these girls work in the business, still attend school and get top grades! – And I thought I was busy!!

In addition to this Maddie recently appeared on the US television show the Shark Tank, where in order to start moving towards a global distribution network and the creation of a new line aimed at older teenage girls and adults, she took a $300,000 investment, from three big players in the investment space Lori Greiner, Mark Cuban and Robert Herjavec, increasing the value of her company to a whole new level. Watch out for this young lady – the success stories have only just begun.

Previous article Launch: My Social Stylist
Next article Why your Startup will probably Fail
Via Other
Tags entreprenuerstartups