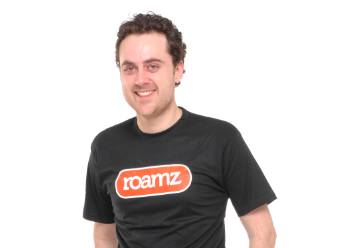 In a world where physical and virtual life is intertwined, it’s hard to escape from all the apps that seem to dominate our way of living. So, it comes as no surprise why mobile technology is the ‘it’ choice to start a business.

Meet 29-year-old Jonathan Barouch, founder of Roamz, who is doing just that. He’s the creative mind behind the app he dubs as “the social goggles for the real world”. He describes the intelligent design as using x-ray vision into places, allowing you to see what people are talking about before you step out of your humble abode.

Quiet experienced in the competitive environment of business, Barouch says he didn’t have to create the wheel to start something. In 1999, Barouch established his first startup at the age of 17, fastflowers.com.au. The online flowers and gifts business was one of the first e-commerce companies in Australia that landed him a feature on Channel 9’s Money program and as they say ‘the rest is history’. At the end of 2010, Barouch sold the company that had a customer base of close to 400,000 to entrepreneur Jack Singleton.

The concept behind this innovative tool, akin to other successful entrepreneurial stories, dawns from frustration. He saw an opportunity to branch out into the connected, yet “disruptive and game changing mobile world”, when he and his growing family were sick of going through “if only we had known, I would have gone” moments.

As a result, Barouch, 28 at the time, set the task to build technology that could “intelligently harness all the social content floating in real time into a funnel, whether it is a wine festival nearby to a new pizza joint around the corner,” he said.

But it took a year to construct. Barouch was fortunate as he received backing from Australian communications company Salmat and raised $3.5 million and “built a kick arse team of 12 people from engineering to mobile development backgrounds”.

How does it work? “Sign-in with a facebook account or an email and you’ll be able to find out about events, live events or “a celebrity sighting in Disneyland for instance,” recalling a moment when a Roamz user captured an image of Adam Sandler with his child.

The Roamz 2.0 version recently re-invented itself with an easier and “sexier design”. New updates includes a commenting feature, integration with Google, helping users rove to their destinations and the more you use the app, the algorithms continue to personalize content based on previous behaviour.

The ultimate aim of Roamz was building a new but better tool to engage the public with one another and places. To date, just over 110,000 users have registered with the free app that is available to download via iTunes.

Currently, the team has started marketing campaigns to kick off the new Roamz 2.0, which can be found on www.roamz.com website.

Jonathan was recently named in the Smart Company 30 Under 30 List and was one of the 5 finalists for 2012 BRW Entrepreneur of the Year.

Previous article Startup helps new mums lose over 75,000 kgs!
Next article When is it time to buy my first server?
Via Profiles
Tags