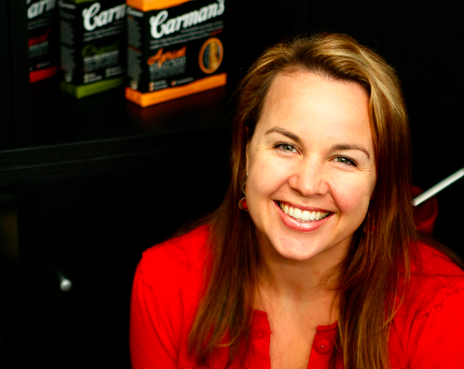 Founder of Carmen’s Kitchen, Carolyn Creswell is one of the most recognizable faces in the food and beverage industry – her muesli products are in all the major supermarkets around Australia and she appears year after year on the BRW Young Rich List.

Behind every success there is a story and Creswell’s is one of determination and resilience. A part time role with a small muesli company led to her purchasing the company off the owners when it was about to close, along with a business partner.

The entire transaction cost Creswell $1000 and instantly transitioned her from employee to business owner. “Times were tough at the start, I remember having to go and do the banking every single day in order to pay our suppliers” states Creswell reflecting back.

After a bit of time her business partner decided to move on and Creswell became the owner of the business, her belief in the product and what she was trying to create kept her motivated. Creswell knew that in order to take the company to the next level she needed to get her product into the supermarket chains.

Knocked back multiple times before breaking through, Creswell always made sure that she asked a very simple question that most don’t “What is it that you guys are looking for?”

By knowing what they wanted Creswell could then give them what they want. Simple and effective, and this is what led to the success you see today. Amongst her own brands and strategic partnerships with Virgin airlines etc Creswell also white labels her product for other companies – another smart and effective move taking the company to new heights.

When asked if she has a mantra she lives by Creswell says “In our company, we have a saying – Drive it Like you Stole it – Speed to market is so important.

Previous article When is it time to buy my first server?
Next article Launch: Tuffys and Tuffetts!
Via Profiles
Tags entreprenuerfeatured