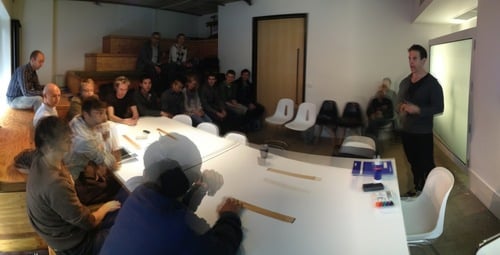 The incubator scene in Australia keeps growing stronger and stronger in Australia. As successful Startmate class travels around the globe pitching to investors and the Pushstart program heads towards their first month into their program, Melbourne based accelerator program Angel Cube today announced their new class for 2012, after the success of their class in 2011.

The Melbourne-based accelerator was founded in 2011 and its mentor team includes global tech entrepreneurs such as Guy King and Bevan Clark of RetailMeNot; Leni Mayo and Mark Harbottle of 99Designs; former CEO of BetFair Andrew Twaits and over 60 others.

Some of the well known successes to come out of last years class include Goodfil.ms, Lexim and TestPilot. Shoe String are actually using TestPilot personally at the moment whilst Cofounda app which we are a partner in is in Beta on the app store – highly recommend.

“2011 was a great year and it’s exciting to see two AngelCube companies raise follow-on funding so quickly after the conclusion of the first program and another become an important player in their niche” says Andrew Birt, cofounder of the program.

AngelCube was Australia’s second accelerator to launch in 2011 after the January debut of Sydney based Startmate. Two others have since joined the fold in 2012. This year they have expanded with a larger mentor network and are making sure they place more emphasis on a tougher milestone driven program.

In addition to the 13 week program and mentorship, AngelCube provides each of the startups receives: $20,000 seed capital; office space at Melbourne co-working space Inspire9; and pitch opportunities in Australia and Silicon Valley. The 2012 program also includes $100,000 worth of perks from partners such as Microsoft, Amazon, PayPal and Rackspace.

The Lucky 8 who will begin their startup accelerator journey in the coming weeks will be:

These guys were founded during the 2011 Melbourne Startup Weekend. They make fun, interactive and Educational games for the iPad and mobile devices. The children games market is something that it about to explode in a big way over the coming 12 months – you just need to look at the acclaim that the likes of BubbleGum interactive for their new games to see that digital gaming experiences for kids is the next big market.

These guys are an application that allows users to see gift reminders and recommendations via Facebook. I am guessing that there will be some other interesting features they are keeping quiet about at the moment – although I personally wouldn’t use this sort of application [because I hate buying presents for people] – gifting is a huge marketplace and these days everyone just wants things to be easier. Especially in the Wedding Market – those things are a pain in the arse to buy gifts for and recommendations would be helpful.

Pickster is a peer to peer marketplace for antiques and collectables. Let me tell you ladies and gentlemen, antiques and collectables is hardcore – seriously that new antique hunter show on Foxtel is crazy [in a good way] – At the moment, the only real online environment for this type of stuff is eBay and random groups, creating a social marketplace that mimics how people are in real life at antiquing conventions and auctions is brilliant – my uncle [an antique auctioneer and collector] is going to be so down with this new startup.

We covered Vinspi when they first launched last year and we are so excited for Ivan and the team! Vinspi is a create your own custom made suit site – and one a shed a few more kilo’s I plan to reward myself by creating a sexy suit for my sisters wedding on his site. The other key feature is the pricing – or should I say quality materials without the huge price tag. If they capture the market right I think a buy out from a huge dept store chain is going to be on the cards.

And whilst I am losing weight to go to my sisters wedding, the gym I go to will probably be using this new service to connect with gym instructors to teach spin class. This new startup matches instructors to classes – It acts as an online automatic temp agency and scheduling tool for gyms. At the rate in which gyms are growing and diversifying, becoming more specific like just “cross fit” focused etc this new service is going to come in handy!

One of the key issues with app developers, is they spend so much time creating apps for other people that they don’t create a portfolio of work for themselves. Kickfolio solves this problem and when you look at the amount of developers creating great things for app stores across the various platforms – they have a very targeted but very big market to go after.

GGBet is a fantasy sports betting game for the eSports industry. One of the really cool features of these guys is they have a system where you can embed their sports betting widget on your website or blog. This means that you engage your audience on your pages for longer and they can still bet and play GGBet while searching your content etc. Brilliant idea.

What these guys are creating is pretty awesome. Imagine if FlipBoard had a child with your TV – That is RefreshHq. It turns your social media streams into short television programs. I am not sure yet as to what it is going to look like – but the team and I here are pretty excited to find out. This allows both consumers and businesses alike to have some fun – and for sites like ours that produce daily content and drive readership through social media -another channel to distribute this in a creative way is something media will embrace very quickly!

A big congratulations to all the successful applicants and we are looking forward to seeing your growth and success stories over the coming 13 weeks.