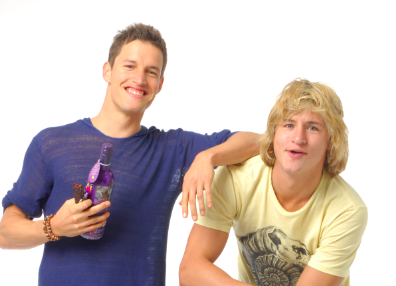 Most of us day dream to become millionaires while we strive to complete the usual nine to five work hours. I got the chance to sit down with beach loving Aussie lads, who figured it out more quickly and have become a global, multi-million dollar success story.

When Dwayne Martens founded Amazonia, he only started with a few thousand dollars he had stashed away. Threww years later, it became a multi-million dollar Fair Trade business. The business was born in a kitchen in Fremantle Western Australia, after Dwayne (then 23), meet with a small Brazilian distributor of the açaí (pronounced ah-sigh-ee) berries, which he bought for $3,000. Amazonia import the açaí berries, also known as purple berries, from the depths of the nutrient, bio diversified and naturally abundant system in the world, the Amazon rainforest in Brazil. Amazonia provides the largest and most nutrient rich açaí product range to Australian and international markets.

The berry itself is 95% seed and 5% skin. Like apples, pears and peaches (just to name a few), most of its nutrients is found on the skin. The açaí is crammed with an endless list of goodies such as; antioxidants, vitamins, omegas and amino acids. The hand harvested berries are stripped into baskets, washed, de-pulped and frozen, ready for dispatch at Amazonia’s Macapa headquarters, located in the North Region of Brazil. This is to guarantee all the nutrients are locked, sealed and ready for shipment.

The 26-year-old university drop out believes Amazonia has introduced a new age of business principles. Dwayne says: “Ethics really make us who we are and we want to show conscious business is more powerful and more effective than the dollar-driven business.”

After designing his logo, and setting up a mobile juice bar, Dwayne put in the hard yards hitting up the Perth Markets. As demand grew, so did the need for extra hands. “I never imagined I’d need so much help,” Dwayne admits. Partnered with Chris Norden (33), the managing director who had previous experience in the açaí industry in Queensland, and Jesse Kaniecki (25), the national marketing manager, a close friend of Dwayne. The dynamic trio run the only certified Fair Trade (and Halal) importer of the superfood that contains 42 times the antioxidants found in fresh blueberries.

In 2009, Amazonia totaled over $2.4 million in sales and during the 2010 financial year alone, Amazonia açaí sales soared by an incredible 350%.

For the Amazonia trio, being fair  trade certified meant it guarantees the protection of the native trees from loggers and cattle farmers and in return, the locals are paid to preserve the forest. Amazonia supports over 4,000 Brazilian families who work under its fair trade initiative. “It’s real positive business, business that benefits everyone,” says Dwayne. “We want a better world and doing so, have worked hard to ensure all ethical standards are met and continuously improved,” he added. The Amazonia boys annually fly out to the Amazon to guarantee the practices are never compromised. Dwayne believes “being certified as fair trade ensures real financial incentive to preserve some of the 6.1 million acres of açaí forests.” Dwayne spells out the more Amazonia berries they sell, the more açaí forest they can keep standing. And Amazonia’s efforts are currently protecting over 2,000 acres of açaí forest, simply through the sales of its products.

But that’s not all. The local women in Macapa hand make açaí bracelets from its seed. Amazonia purchases a few thousand of these bracelets, sells and re-invests all profits from the bracelets back to the women in the community. And as an alternative fuel source, the locals of Macapa re-use the left over açaí seeds as burning material for their furnace. “From every tonne of Amazonia’s frozen and dried powder, there is 20 tonnes of leftover seed” says Dwayne, further protecting and promoting forest sustainability.

Amazonia, currently based in Bellevue Hills in Sydney, now sells to Malaysia, Greece, New Zealand, Hong Kong and Singapore and the international demand for the range is rising. In NSW alone, Amazonia products are sold in over 80 listed health food stores.

For Amazonia 2011 is an exciting year as the company have broken monthly record sales, which they believe is a testament to the quality of its products. Their health range was awarded the Best Consumer Product at Telstra’s 2011 Business Awards Ceremony, officially recognised as one of Australia’s best health foods you can eat.

Despite their ever-growing bank accounts and a multi-million dollar business, their priorities and way of life have not changed. The trio continue to live simplistic lives by the beach, hitting up some surf whenever they can. “We don’t drive a fancy car” says Jesse. “I’m a country boy at heart, honest by nature and that’s not going to change,” he added.

As the only 100% Australian owned and fair trade açaí company, its young and dedicated team, who swear by  healthy living aim to “set the precedent for sustainable and conscious businesses” and the writing is on the wall for those who wish to follow.

* Original Interview was conducted in Septemeber 2011. Sales figures and facts reported were reported as of September 2011.  This article was first published in the September 2011 issue of Shoe String Magazine.