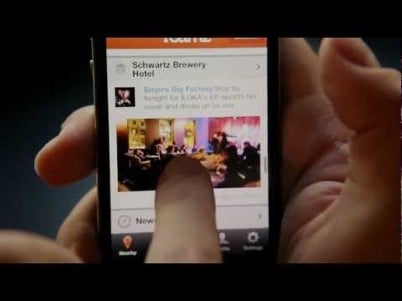 Deputy Premier and Minister for Trade and Investment Andrew Stoner has congratulated Sydney technology company Roamz  during last weeks official launch of the latest version of its innovative location-based app.

Mr Stoner said Roamz, based at Surry Hills where it employs 12 people, reports solid progress with its technology which has been developed and promoted to international markets with NSW Government support.

“Roamz acts as a personal tour guide to tell users about local places and activities that interest them,” Mr Stoner said.

“The mobile social platform also allows retail and tourism businesses to engage with customers interactively through their mobile devices.

“Since launching in October 2011, Roamz reports 60,000 downloads of its app and has made over 1 million recommendations to its users.

“In February Roamz won significant domestic recognition when it was named in BRW’s list of Top 10 Startups to Watch for 2012.

“Today’s launch of Roamz 2.0 aims to build on its success with enhancements to its technology including a new user interface, smarter locational content, improved social media features, and integration with Google Maps.

“We are delighted to have helped Roamz through the Collaborative Solutions Mobile Concierge program, which supported consortiums to develop new mobile technologies for the retail and tourism sectors.”

Roamz CEO and founder Jonathan Barouch said: “The support and assistance we received from NSW Trade & Investment has been invaluable in commercialising our technology.

“The Mobile Concierge grant allowed us to pilot our software with industry partners such as PayPal and gain valuable feedback, which helped us design and build our unique intellectual property.

“Participating in G’Day USA in California opened many doors for Roamz and gave us a great platform to get people excited in the global technology that we built in Sydney.”