Tapit, taking on the world. 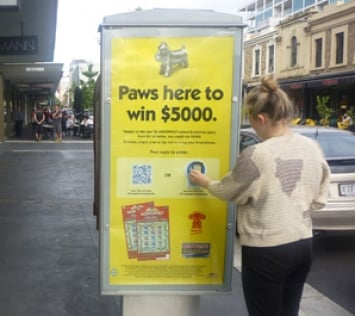 Tapit is one of the most innovative startups in terms of technology for 2012. Tapit uses NFC [Near Field Communication] technologies to market a customers brand with nothing but a simple tap of a customers smartphone.

Basically what Tap it do is allow you to push out content and offers to potential customers anywhere when they tap their phone against a Tap It icon. For instance you may be at the bus stop and their is a movie poster for an upcoming action thriller, you will be able to tap your phone against this icon and then the trailer of the film might play – this could then be made even more powerful by offering you a discounted ticket or a free popcorn if you go see the film at a particular cinema.

The Sydney Based startup was formed by Jamie Conyngham, David Kainer, Andrew Davis and James D’Arcy. They originally funded the business them selves and also received a grant from the NSW Government as a part of their mobile concierge program, this also followed quickly with a round of investment from a private investor in a Sydney Angels round of funding.

Tap it have also been selected to represent Australia at the Asia Demo Day 2012.

Previous article I’ll pay your Mortgage, you let me paint your house Bright Orange!
Next article Ghetto Preach your 30 second message for $5.00!!
Via Profiles
Tags entreprenuerfeatured