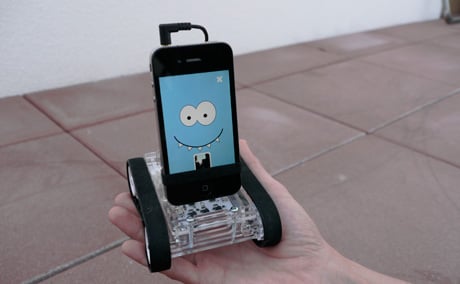 This is a real Kickstarter success story. The goal was to first of all raise $32, 000 so new company Romotive could build small robots that used your everyday smart phone as a brain.They ended up raising over $110 000 and have hand built all the robots that they have made so far. They plan to produce another 2000 in February. However with the success of app driven gadgets on the rise, I think they will have to start producing things a lot faster and look at outsourcing the manufacturing of these things.

Other than the fact the product is very cool, the greatest thing is you don’t need to be in proximity to these robots to have them work for you. For example if you had gone away for the weekend and you wanted to check up on what the kids were doing, if your Romo is powered up, you can have yourself a sneaky little video tour of the house to make sure everything was in order – and you thought Facebook stalking was bad!

I like the fun and creativity behind this new venture, I think there are some cool things to come from them yet, if this is their first prototype and product.

Previous article Smartphone on your Wrist
Next article Pitch to Media: Press Idol
Via Other
Tags entreprenuerfeatured