How to be a Super Hero. 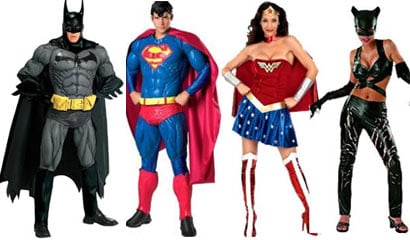 I watched a movie once called ‘Up in The Air’. George Clooney was the lead actor and sadly I felt the movie was mediocre. This was extra disappointing since I generally have alot of respect for George. George and I do not know each other of course but I like to think that if we met we we would be best mates. All jokes aside though, there was one particular scene in this movie which caught my attention. A brief summary on the movie is necessary to put this scene into context so here is my best version of an impartial unbiased recount.

The movie is about the everyday life of Ryan Bingham  (George) who’s job is basically to fly around the world and fire people. Corporations contract the company Ryan works for to essentially do their dirty work for them when downsizing. During one such occasion a man asks Ryan what he is supposed to tell his kids after hearing the news he is being layed off. On this particular occasion Ryan is being shadowed by a rookie who decides to interject at this point with a very tactless opinion, which only serves to infuriate the man further. At this point Ryan intervenes and asks the man if his children’s admiration is important to him. To which the answer is of course yes. Ryan then states: ‘I doubt they’ve ever admired you Bob’ which further confuses and infuriates the man until Ryan asks him another question: ‘Do you know why kids love athletes?’ for which Bob has no real answer. Then Ryan says ‘kids love athletes because they follow their dreams’

Bob is a little perplexed and remarks ‘well I can’t dunk!’. To which Ryan replies: ‘ No but you can cook’. Ryan had done his research on Bob and saw that he had minored in french culinary arts at college and bussed tables at a premium restaurant to gain useful experience while also putting himself through school. After he had graduated he went straight into the job he was now being fired from. Ryans next two questions were even more telling. First he asked Bob: ‘How much did they first pay you to give up on your dreams?’ and next he asked: ‘and when were you going to stop, and come back and do what makes you happy?’

This scene really highlights the issue many people face when it comes to work and life. The whole reason Bob got fired was because he was working a job which he had no passion for. As a result he eventually became viewed as expendable and was layed off. I truly believe this happens to many people who seem to ‘scale down their dreams’ and delude themselves into believing that only the lucky ones get to do what they love and love what they do. If Bob had followed his dream and persisted with his cooking he would no doubt have succeeded since that is what he was passionate about. Anyone who has ever done anything extraordinary has ALWAYS followed this principle. Richard Branson has said frequently that before you do anything. Find your passion.

Your passion is closely aligned with your highest value. (to learn what this is and how to identify your highest values, read this post) I learned from studying Dr John Demartini’s work that you will endure pleasure AND pain in pursuit of your highest values. And this rings true for anyone who has ever done anything extraordinary. Michael Jordan famously remarked: ‘I have missed over 9000 shots in my career. I’ve lost over 300 games. 26 times, I’ve been trusted to take the game winning shot and missed. I’ve failed over and over again in my life and that is why I succeed’.

Unfortunately people like Michael Jordan and Richard Branson are the minority, and as a result these people are treated like superheros and put on pedestals. The thing is, I believe there is absolutely NO difference in the capabilities of these people and those of anyone else. The reason I believe this is that every single person on earth is a genius when it comes to their highest values. I am extremely passionate and gifted when it comes to improving performance and getting the best out of athletes, but if my car breaks down I would have absolutely no idea how to fix it. To be honest  I wouldn’t even know where to start. Obviously I recognise this and delegate this task to those who are passionate and talented in this area.

Now consider this situation, I am originally a farm boy and worked on the farm for most of my life before leaving home at 18. If my father had expected me to continue the family tradition and projected this belief onto me I probably would have ended up a farmer like many others from similar backgrounds. Lucky for me, my Dad believed in teaching us how to work hard and apply ourselves through having us work on the farm from a young age, however at no point did I feel under pressure to follow in his footsteps. Instead he encouraged me to do whatever I wished but stipulated one non negotiable. ‘Just do your absolute best at whatever you choose’. I consider myself extremely lucky to have been supported in my pursuits as opposed to feeling pressured into perpetuating a legacy which was never mine.

I believe one of the main reasons for the high rate of suicide in rural areas within Australia is directly related to this situation where people subordinate to the pressure felt from society. This pressure may be magnified since usually these rural communities are very close knit and everyone seems to know everyone as well as their business. The lack of fulfillment as a result of this subordination coupled with the isolation of the rural environment leads to desperation and despair. less access to social support systems and growing up in a culture where people are generally not encouraged to voice their concerns or emotions can create a situation where people feel trapped with no way out.

The tragedy here is the volume of talent and potential wasted. The only reason anyone would envy someone who is considered a ‘star’ is that they fail to see the same traits which they admire within themselves. In actual fact we ALL possess the qualities required for success  and fulfillment, however we seem to slowly lose sight of this as we get older as result of our conditioning from outdated and uninspiring education systems and the media. A common question I get asked is ‘what are the players like?’ which always amazes me since the question presupposes that elite athletes are quite different and special when compared to  everyone else. Even more amazing is that when I tell these people that athletes are no different to you and me they usually think I am lying or not telling the full truth or something.

Now I am determined to do something about this situation and hopefully my next challenge for you guys will shed some light on how to become a ‘superhero’ and move toward living the life you always dreamed about if you are not already doing so. So If you are interested in being a superhero, follow these three steps to find your passion and then start moving toward it!

1. Find out what your highest values are (read this post) to learn how to do this

2. Write down EVERY skillset you have ever learned from any person or job, then identify the skills you enjoy most and are best at using.

B: How can you get paid to do the things you identified in the question above?

The last question might seem quite difficult to answer at first, however cross reference your answer from A with all of the skills and knowledge you have ever learned and most enjoy applying as well as  your highest value and you should find that your brain begins to cough and splutter and eventually ideas, schemes and plans will come flowing out after completing this exercise.