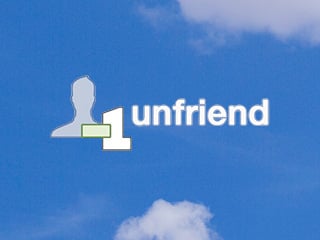 Technically  “De-Friending” people and companies is the smart way to clear out a whole heap of stress from your life and reinforces the importance of offline relationships as opposed to those forged online. ‘It’s not about being nasty; it’s about spring cleaning your relationships and valuing the ones that are close to you” Dave states.

“When you get right down to it, there’s enough stress going on in our lives as it is – global economic crises, global warming, wars, famines, sickness and unemployment.  The need for the stability and reliability of real friendships is greater than ever but the proliferation of online friends has simply devalued the idea of good relationships.  You can’t have 400 real friends!  It’s physiologically impossible and is simply turned into a weird popularity contest!” says Dave.

Abrahams stresses it was an idea he picked up from USA comedian Jimmy Kimmel who shares the popular view that the word ‘friend’ was being diluted by Facebook and social media networks.  “Jimmy called it ‘National Un-friend Day’ in the US, although my grammatical advice opted for ‘National De-Friend Week’ instead.

Many of us have many social media accounts we can search through and many are linked together.  Dave continues, “You may want to De-Friend someone on Facebook but keep them  LinkedIn or on Twitter.  You may just want to subscribe to their YouTube videos but stop following their tweets.  It’s a big job for some of us – it could even take a whole week to do it properly. And while your daily menu reports, baby photos and inconsequential asides may drive some people nuts, it’s feasible they still like you as a person, just without the minutiae.”

To start the “De-Friending process”, take a look at all your social media accounts; set aside some time to put a broom through the names and business pages that don’t mean anything to you anymore.  It will simplify and unclutter your real relationships (and your head).  Many may find that they end up with only a dozen or so close friends and family that they want to share information with.  For some younger people that prospect is seriously scary – only a dozen or so friends is unheard of while for the 30-somethings it may seem like a blessing.  Regardless of age, the relief is tangible.

Dave recommends jumping  off those company ‘like’ pages too.  ‘It might have been neat to ‘like’ a chip packet, make-up brand or retailer two years ago, but perhaps you’ve moved on since then; says Dave.  ‘This is equally important for companies, as ‘like’ or ‘subscribe’ numbers should not be assumed and companies need to keep investing in their social media activities to keep the relevance alive and fresh.’

‘Of course, it’s incredible that we need to create a De-Friend Week at all!  Just 5 years ago the very suggestion would have seemed ridiculous, but the world has changed dramatically in so many vast and varying ways that we need to keep re-inventing ourselves to keep the picture clear’ concludes Dave.

About Dave Abrahams: Dave is a co-founder of one of Australia’s largest Social Media businesses, vTeam.com.au, a system used by approximately 30,000 Australians and growing rapidly.  Unlike most social media systems, it’s based on validated relationships through trusted third parties like schools, sporting and volunteering groups.

He’s a passionate believer in the power of technology to improve people’s lives and is heard regularly around the country on numerous ABC regional radio stations under the moniker “Digital Dave”.

Dave has also recently been appointed to an official honorary role promoting the use of broadband technologies by the Federal Department of Broadband Communications and the Digital Economy.

For more information about De-Friend Week and to share your De-Friending images head to www.defriend.net.au