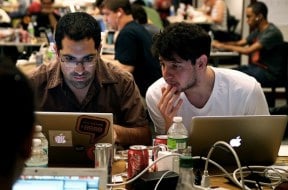 The team that won the first Startup Weekend competition held in Australia will be heading to China to demo at Techcrunch Disrupt Beijing.

The idea, Native Tongue, was the brainchild of Matthew Ho to combine language learning and gaming. It was borne out of his years of frustration in learning a second language, Mandarin Chinese. He had a vision to “make languages easy and fun to learn by using gaming.”

This led to the creation of the Native Tongue team consisting of James Drucza and Kym Huynh for the development of Mandarin Madness, an early prototype that taught Mandarin using game mechanics.

It was built in 54 hours during the Australia’s first Startup Weekend competition. In its current form, Mandarin Madness challenges users to match Chinese characters with visual representations, with each progressive level increasing in speed and difficulty in addition to new game modes.

Matthew Ho, CEO says, “We know that gaming has a high level of engagement. So we take the best elements of gaming and apply it to education. We want to create addictive experiences that engage the user to keep coming back and playing the product, which will aid them to learn a new language.”

Native Tongue has devised a unique approach to language learning as it is designed to be natural language agnostic, using visual and audio sounds from gaming. This allows anyone from any language background and any age to start rapidly learning and acquiring new vocabulary. Native Tongue vision is to become a mobile game-learning platform for languages.

Matthew Ho says, “We picked to showcase our demo at TechCrunch Disrupt Beijing because TechCrunch is one of the biggest tech events and the first time it is held outside of the US. It also happens that our first product Mandarin Madness is designed to teach Mandarin Chinese. “

The first product, Mandarin Madness will be initially offered on iPhone and Android. It is set to launch in a few weeks after exhibiting at TechCrunch Disrupt.

The core team behind Native Tongue is Matthew Ho, James Drucza and Kym Huynh. The team has been working part-time on it since winning the competition in May, and in September decided to focus on it full time to take it to market. They are now based at the York Butter Factory, a tech co-working space in Melbourne, Australia.


TechCrunch Disrupt Beijing 2011(http://disrupt.techcrunch.com/BJ2011/) will bring together leading technology innovators and investors and numerous new startups. The conference will also bring the popular Hackathon – a 24-hour competition where 500 leading innovators develop and present new products – to China for the first time. TechCrunch Disrupt follows a format that combines thought-leading discussions with new product and company launches. Morning executive discussions debate the timeliest disruptions in the technology industry. In the afternoons, new companies will launch for the first time on-stage during Startup Battlefield. Around 15 companies were selected this year from a pool of more than 400 applicants. Another group of early-stage startups will exhibit in Startup Alley. TechCrunch will award a $50,000 grand prize along with other award recognitions at the conclusion of the conference. The Hackathon is Oct. 29 -30; the main conference is Oct. 31 – Nov. 1, 2011 at China National Convention Center (CNCC) No. 7 Tiachen East Road, Olympic Green, Chaoyang District, 100105 Beijing, CHINA.

TechCrunch (www.techcrunch.com) is a leading technology media network dedicated to obsessively profiling and reviewing new Internet products and companies. Founded by Michael Arrington in 2005, TechCrunch and its network of websites reach over 13 million unique visitors and more than 30 million page views per month. TechCrunch was acquired by AOL in 2011 and operates a global network of websites including dedicated properties in Europe and Japan.. TechCrunch’s CrunchBase is the leading open database about startup companies, people, and investors. In addition to TechCrunch Disrupt, TechCrunch hosts a number of other recognized conferences and events, including the Crunchies Awards (http://crunchies2010.techcrunch.com) and various meet-ups worldwide, serving as community platforms for industry conversation and collaboration.