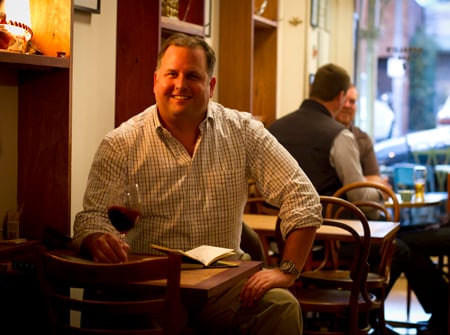 The road bringing Brash Higgins Wine Co. creator and vinitor Brad Hickey to the rich terroir of his Omensetter Vineyard winds through 20 years of experience in food and wine, including a decade as head sommelier at New York City’s top Michelin-starred restaurants and a further 10 years of baking, brewing and travelling to the top wine regions of the world – before finally settling in 2007 for a new chapter in South Australia.

The name ‘Brash Higgins’ came about from a nickname swiftly bestowed by Aussie friends on the newly arrived New Yorker, ‘Brash’. The addition of the sonorous surname ‘Higgins’ completed the alias he used to keep him off the authorities’ radar long enough to prune the season and to fall in love with McLaren Vale, and, ultimately, with Nicole Thorpe of Thorpe Wines, now his partner. The odyssey became a special kind of love story.

The fruit for the Brash Higgins SHZ and CBSV is 100% sourced from Brad’s recently renamed Omensetter Vineyard in the heart of McLaren Vale, situated on seven hectares of red-brown clay over limestone with an eastern sloping aspect, offering grand views to the Willunga Escarpment and to the Gulf of St. Vincent. Four hectares are given over to shiraz (clones BVRC 12 and 32) and two to cabernet sauvignon (Reynella clone).

Sicilian red variety nero d’avola (clone Matura 1 grafted to own rootstock shiraz) makes up the final hectare of the vineyard. The first harvest of nero d’avola is maturing, in line with traditional practice, in five 200 litre clay amphoras (hand created by a local master potter) and is due for release in 2012. A small grenache/mataro co-ferment, from two new sites, is set for release next year, as well.

Brad has been producing wine since 2007, collaborating with winemaker Tim Geddes and viticulturist Peter Bolte for the past five harvests to develop the Brash Higgins label.