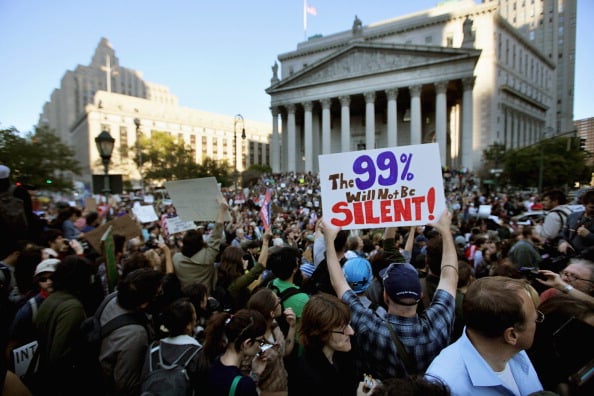 The “Occupy” movement in some way, shape or form has no doubt by now, been visible to you in the media. Up until literally an hour before writing this post, I had no bloody idea what the whole things was about. All I knew was that a bunch of grubby people had been sleeping on the streets of Melbourne in a peaceful demonstration. They have every right to do so, obviously. What I found really unclear was their purpose “we are the 99%” is such a vague, uncertain sounding statement to cause people to give up food, a warm bed and basic hygiene for a week.

I am a “goal” guy – give me the goal, the rules and I will play the game by those rules to achieve it. The fact that the mission statement for the “occupy” movement is so blasé  made it hard for me to grasp, it wasn’t clear to me how success would be measured and what they were specifically fighting for. All I heard was the word “capitalism” being bandied around, and as a pro-capitalist, I didn’t get the problem – and would have dismissed the entire movement as a bunch of hippies holding hands and shitting in fountains being angry at corporate Australia.

I am glad to say though, I was enlightened to the core issue through conversations that I had taken part in today in regards to the way some of these wealthy people achieved their money. As a capitalist and entrepreneur  I am pro achieving great wealth through clever, competitive, hard work that plays by the rules. When you cheat and lie however, it breaks the rules, it’s not competitive – it’s criminal. My understanding is that this is what the real protest is about, the cheaters and rule breakers, not the wealthy that have worked hard to get where they are.

My fear though is that in much the same way as the proverbial saying goes – too many agendas can spoil the protest. From my perspective there are people treating this as an anti-capitalist movement, I would also argue that many are just joining in the protest and don’t really know anything of the bandwagon they are jumping on. If the goal is to raise awareness, then they achieved  that by being removed by the police – in my opinion that was a calculated move on the protestors behalf, which everyone knows will grab headlines. I feel sorry for the police that were made look like criminals for going to work and doing their job that pays them their less than adequate wages to feed their families at night.

So what does this have to do with startups? The shift in the way people starting out conduct themselves in business these days is very different to when the big “evil” corporates were starting up. There is more equality, collaboration, innovation, and environmental and social conscience when it comes to building the frameworks within which their businesses will operate. Social Enterprise is on the increase – financial entrepreneurs are coming up with disruptive models to the banking sector that favour the customer. And if you think politics are not in for an overhaul, think again – two things will happen, a complete overhaul and change of direction of the two major parties or we will see new parties governing the way we do things.

Change is constant, standing is what you believe in is great. But personally I think that there are much more innovative ways of making it happen than sleeping in the streets and taking a dump on a police car.