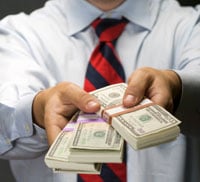 Kane Sherwell is the founder of We Share. Previous to We Share’s development Kane was a highly awarded real estate manager. From 2006 to 2009 Kane sold over $150million of real estate, earning him multiple awards. He sold house and land packages, full apartment complexes and family homes from all over Melbourne.

Moving from real estate to banking (home loans), Kane was employed as a mobile banker for a major lender, it gave him the vision for We Share as he saw just how much money professional firms are receiving for providing a name and number. With an idea in mind, Kane’s aim was to return the majority of funds back to the borrowers.

Experimenting the concept with his known real estate alliance partners in the western suburbs of Melbourne. The response was overwhelming, with 1 in 3 mortgage prospects signing to the service and $1000’s of dollars being returned to home loan borrowers.

Kane is now planning to expand We Share ‘s home loan and commercial loan offerings nationally via a number of channels which benefit the community.

To be a lead generator to the major lenders of the financial industry and return commission given over the last 10 years back to the public via a simple online platform.

Overall any borrower dealing direct with a lender without being referred by We Share is losing a substantial cash back.

How the idea came about

In 2009 he was employed by NAB as a mobile lending manager. One of his main tasks was to source business by building my referral network of accountants, financial planners and real estate agents for home loan products.  Over time these referrers were paid $1000’s for giving him prospective borrowers names and phone numbers. It was money which they didn’t care about, as they just wanted their clients to be serviced.

After being made redundant from his position in 2010, he was on unemployment benefits and had an idea without any traction. Using his contacts, he sourced a financial aggregator and set up a contractual relationship which was different to their normal customers. This allowed him to refer finance to the major lenders.

He then changed his company name to We Share

With $1500 to his name he used Freelancer to source a cheap web designing  guru, which lead him to an ex-SAP database engineer in Scoresby. He custom built his CMS, CRM and website for $800 and operated out of a decayed rental property.

Whilst the site was being built, he typed a number of financial, real estate and accounting  helpful guides, as this is his back ground.

He then researched and researched a number of ways how I could guerilla market the service for free.

So how is he going so far?

Overall the first month was a success, he referred 33 applications to lenders all over Australia with 30 being approved, that was $60,000 revenue and $30,000 profit. And he is just finishing his second month and he has completed similar numbers.

So in 2 months, We Share has made $60,000 profit for themselves and given the same amount back to lenders, not too bad from someone that was on the dole 9 weeks ago!

We Share is about to receive funding and launch a national advertising campaign upon the re construction of the website. We will be offering more services and returning  large funds back to the community.

I think we should keep an eye on this one, I predict he will be growing very fast, very soon!   www.weshare.com.au