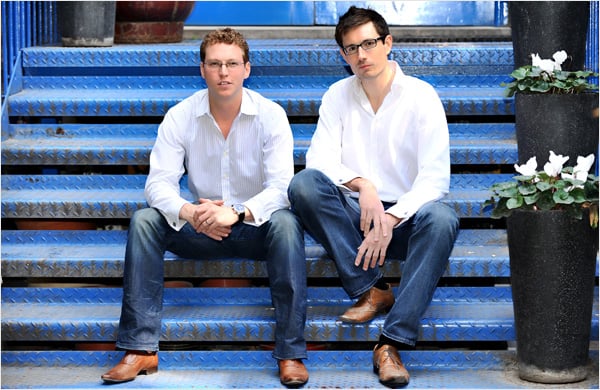 It took roughly a year of discussion and planning between friends Andy and Alastair before they left their jobs to start work on Huddle full-time. Andy had worked in the online collaboration sector for some time so knew the market well. Alastair’s experience working for various web and tech companies also meant he had first-hand knowledge of the collaboration market’s shortfalls and it wasn’t long before the pair began exchanging ideas on a creating a superior offering.

Six months into working on the venture alongside their day jobs, Alastair and Andy felt confident enough to dedicate themselves to it full-time. A former employer of Andy’s came on board as an angel investor which provided the start-up capital to get going, secure office space and the company’s first members of staff. Andy admits it was a big leap of faith to give up their salaried roles but says starting up with a friend provided the ‘emotional safety net’ needed to get through it.

Huddle’s first customers were friends or former colleagues of the pair, who were offered free trials of the software in exchange for feedback. “We were realistic,” says Andy. “We knew people weren’t going to pay for something they knew nothing about straight off the bat. It also helped us refine the product. You can be a great product designer but, with the best will in the world, you can never accurately predict how everyone will use it, so getting feedback was crucial.”

The Huddle product was formally launched in March 2007 after being honed enough to start attracting paying customers. While the nature of the service allowed viral growth, Andy and Alastair knew they’d need a substantial cash injection to attain that global goal. “Raising finance is always stressful,” says Andy. “When you’ve got a large team you offset that effort but when there’s just a few of you it takes time and attention away from running the company. However, after a certain point all VC’s start to come up with the same questions so as long you’ve prepared the answers it becomes less time-consuming.”

Huddle secured a $4m series A round of funding in November 2007 which saw them through tremendous expansion over three years, and facilitated some great partnerships for the service including deals with professional social network LinkedIn, Hewlett Packard and Intercall. Alongside the securing of clients such as Panasonic and Procter & Gamble, these partnerships meant a US base was necessary. After securing a further $10m in funding from Matrix Partners in 2010, Andy moved out to San Francisco to set up Huddle’s stateside office. “We wanted to develop our partnerships and work with these companies more closely,” explains Alastair. “Some of our big clients wanted to roll the use of Huddle out within their businesses and those kind of relationships need lots of support.

“The great thing is we were able to grow our user base in the US from a little base in London which even a few years ago wouldn’t have been possible. And it’s testament to modern technology that being so far away from Andy has felt fairly natural. We work together on Huddle every day so aside from the time difference it’s pretty much business as usual.”

Securing the series B funding from Matrix and opening up an US base also coincided with a major milestone for the company – cashflow profitability. Huddle now expects to quadruple in size in 2010 as it fosters its global relationships. But while the company is well on its way to dominating the online collaboration space, these co-founders remain patient.

“With any start-up, when you’re small the temptation is to chase the money and go for the short-term benefits,” says Andy. “But you can’t think like that. It’s not about today’s revenue, it’s about what makes you a massive success in five or 10 years’ time.”