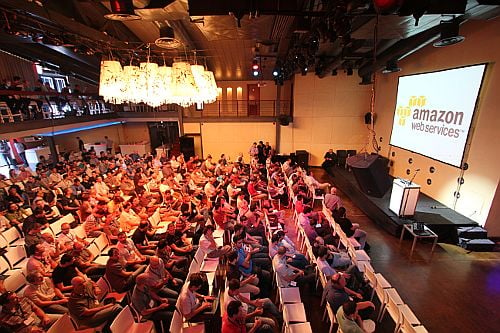 Amazon Web Services LLC (AWS), an Amazon.com company (NASDAQ: AMZN), yesterday announced the call for entries to the fifth annual AWS Start-Up Challenge, a contest to recognise innovative start-ups that are built on AWS’ cloud computing platform. AWS has expanded the Start-Up Challenge worldwide and will choose a total of 15 regional semi-finalists from the Americas, Asia Pacific, Europe, the Middle East and Africa. From among the regional semi-finalists, global finalists will be chosen and awarded a package of $10,000 in AWS credits and a trip to attend the final round of judging and awards ceremony. The global grand prize winner will be awarded with $50,000 in cash and $50,000 in AWS credits, AWS premium support services for one year and technical mentorship from Amazon Web Services for one year, as well as a possible investment offer from Amazon. All eligible contestants will receive $25 in AWS service credits to kick-start the process of building their businesses on AWS. To learn more about the AWS Start-Up Challenge, visit http://aws.amazon.com/startupchallenge.

AWS enables start-ups to cost-effectively and quickly innovate and build the infrastructure required to run their businesses. AWS Start-Up Challenge entries will be judged on their implementation of AWS solutions; originality and creativity of the business; likelihood of long-term success and scalability; and how well the business addresses a need in the marketplace. Entries must be received no later than midnight US Pacific Time on October 2, 2011. Regional semi-finalists and global finalists will be announced in November. At the final AWS Start-Up Challenge event in November, finalists will present their businesses to a panel of AWS executives, venture capitalists and an audience of technology industry leaders. The final event will be streamed live worldwide.

“Within the AWS community, we’re seeing hotbeds of innovation emerge throughout the world. AWS has levelled the playing field as smaller companies gain the resources to compete in ways that were very expensive and often cost prohibitive in the past,” said Adam Selipsky, Vice President, Amazon Web Services. “AWS allows customers to pay only for the resources they use with no up-front investment, enabling entrepreneurs to put their ideas to work as quickly as their businesses scale.”

“Before we won the AWS Start-Up Challenge, we had very little interest from venture capitalists. The week after we won the competition, we raised more than $1 million in angel funding and fielded calls from more than 30 interested venture capitalists. Then in April 2011, we were acquired by Inmar and today our business is taking off,” said Mike Kavis, CTO, M-Dot Network. “The beauty of AWS is that as we add customers, we can simultaneously add compute resources. Unlike the old days where infrastructure had to be purchased in advance and sit idle until consumed, we now add and pay for infrastructure resources on demand as our transactions and revenue increase.”

“Since being honoured as an AWS Start-Up Challenge finalist, TellApart has continued on an insane trajectory, more than doubling our client list, revenue and headcount. We recently completed a $13 million Series B funding round, and the venture capitalists we spoke with were surprised at how fast our business has grown and how little we had to spend to accomplish that growth. It goes without saying that AWS continues to be a pillar of our success and efficiency,” said Josh McFarland, CEO of TellApart. “TellApart’s vision revolves around helping our e-commerce clients ‘tell apart’ their highest value shoppers from the rest. We’re analysing our customer’s data at more than 10,000 requests per second every day, which requires serious compute power. AWS makes it possible for us to analyse this big data at scale.”

“Consumer and customer confidence in Mediology Software has definitely taken a giant leap forward since we returned to India as a finalist for the 2010 AWS Start-Up Challenge,” said Manish Dhingra, Director, Mediology Software. “The AWS platform provides us with easy access to a comprehensive suite of technology infrastructure services such as databases, storage, messaging, content delivery, email and monitoring that we can quickly incorporate into our applications. This allows us to create a globally scalable architecture while keeping costs down so we can pass along the savings to our clients and stay competitive.”

Eligible contestants must have generated no more than $10 million in annual revenue and no more than $10 million in outside funding. Start-ups submitted for the contest must use the cloud computing solutions offered by AWS, such as Amazon Elastic Cloud Compute (Amazon EC2) or Amazon Simple Storage Service (Amazon S3). A complete description of the prizes and contest rules can be found at http://aws.amazon.com/startupchallenge.