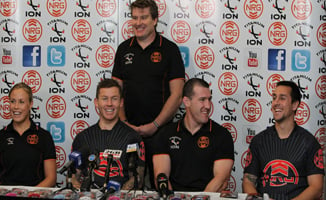 Australian sports product manufacturer  NRG has made a breakthrough in negative ion products, launching a new range of Titanium ION Bands which work to increase blood circulation and decrease recovery time. Early tests indicate that the band releases up to 10 times more ions than similar products.

The silicone wristband comprises negative ions in the form of tourmaline compounds, in conjunction with two Titanium discs which help to conduct the negative ions. Ions are naturally occurring particles that contain either a positive or negative charge.

“The NRG Titanium ION Band is an exciting advance, offering a high concentration of negative ions.

“Our initial testing of the product and feedback from athletes has demonstrated the value of this product. Due to the well-documented benefits of increased blood circulation, it’s not just athletes who will benefit from wearing the band, all of us can experience benefits, such as increased energy,” commented Stewart.

“During the State of Origin period the ability to recover quickly after games is vital, as representative players are required to play back to back games, sometimes in the space of only 48 hours.

“Wearing the NRG Titanium ION Band this year helped to accelerate my postgame recovery, providing me with the confidence to approach each game knowing I would deliver my best. The band is extremely comfortable and easily withstood the rigours of Origin football,” he said.

Previous article Find yo’self a Sports Buddy!
Next article The Purr-fect Slipper
Via Other
Tags featuredservice