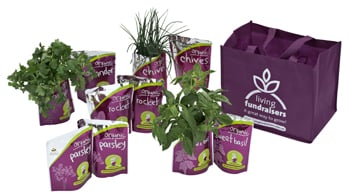 Australia ranks as one of the most obese nations in the world, with increasing numbers of children overweight and facing significant health risks. At the same time, schools and community organisations still sell chocolates as their primary means of raising money. Living Fundraisers tackles these problems, whilst simultaneously providing work for people with disabilities and channelling funds to non-profit organisations.

Living Fundraisers came to life out of a uni assignment.

Rachel and Rebeka met doing the Masters of Entrepreneurship at Swinburne. The business idea started as an assignment that brought together their passions for social entrepreneurship and a desire to reverse the trend of obesity and passivity in Australia.

By the end of the subject they had a business concept, a partnership and had advertised in a national publication. The next step was to actually have some products. So, they created a range of herb and vegetable growing kits that make it easy and fun for people to grow their own produce.

The business was started with less than $5,000, with product components purchased as-needed on credit cards and using small loans from family members. Initially, Rachel and Rebeka assembled the products themselves—the house Rachel was living in had a pool table that was quickly converted to a work bench and there were several late-night sessions involving family and friends pitching in to get orders out.

Since opening in 2009, Living Fundraisers has helped more than 500 schools, children’s centres and community organisations raise in excess of $500,000. We’ve put more than 200,000 herb and vegetable growing kits into the hands of Australians who might not have ever planted a thing in their lives, and last year, more than 30,000 people received a Christmas Card that grew a native Australian daisy.

Living Fundraisers exists to make a positive contribution to society and the environment.

“With every product someone uses, they are reducing their eco footprint in terms of food miles, water consumption and industrial farming. We use organic seeds and soil as a deliberate choice to support organic suppliers”.

“We designed the business to maximise it’s social and environmental impact. Product manufacture is outsourced to a community organisation that supports people with disabilities to lead independent lives and gain the social benefits of work.  We partner with community organisations who share our values and donate a minimum 5% of sales to them. Our current partners are the Stephanie Alexander Kitchen Garden Foundation, Greening Australia and the Happy School”.

“We’ve also found a way to change people’s behaviour and make a positive impact: we call it health by stealth. Most people will buy something simply because it’s a fundraiser—they want to contribute to a good cause or they were asked to buy it by a friend/colleague. Once they have it, they will tend to use it (or give it to someone). People who have NEVER planted a thing in their life have started growing herbs and vegetables because they bought one of our products”. says the ladies.