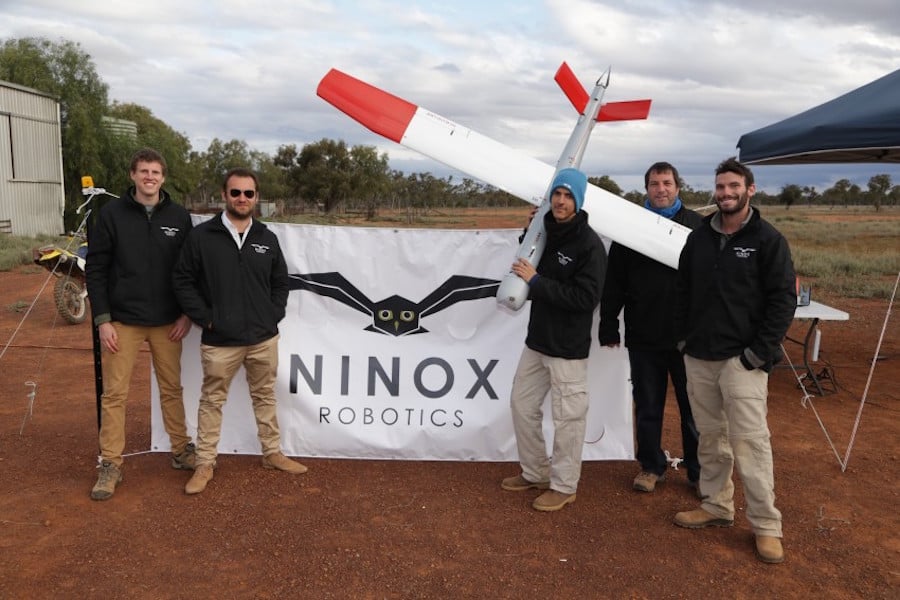 The invasive pet industry is a billion-dollar problem in Australia, especially in vast remote areas where foxes, feral cats and wild boars roam free destroying the ecosystem killing off flora and fauna native to the Australian landscape. However tracking these pests and hunting them down may have just become a lot easier with the official launch of startup Ninox Robtics and its new military grade unmanned aerial vehicles (UAVs), also commonly referred to as drones.

Although there have been many different types of drone trials (specifically civilian drone trials) that have taken place in Australia – one of the leaders in civilian drone technology, Flirtey, also happens to be an Australian company – the trial conducted recently by Ninox Robotics could perhaps be the most ambitious yet.

Its drones use advanced real-time thermal imaging to detect invasive pests in rural areas. Regulatory approval for the trial for the drones has included a number of firsts for a non-military operator in Australia including an enhanced flight height of over 400 metres which enable the drones to cover more ground, flight range beyond visual line of sight (all autonomously) and the ability to fly at night meaning the thermal camera can be at its most effective.

The night flight capabilities are particularly important because most of the ‘pests’ that cause issues in rural areas are in fact nocturnal. Night is not only the time they are most active, but also when they are doing the most damage to farm land and other nocturnal native animals to Australia.

“Australian landholders and managers have been struggling against the problem of invasive pest species for decades, including feral dogs, pigs, deer and rabbits,” says Managing Director of Ninox Robotics, Marcus Ehrlich. “The issue has caused cumulatively billions of dollars in damages and lost revenue, as well as significant destruction to the country’s unique biodiversity.”

“With the application of UAVs, we have a new weapon in this fight, which will provide unparalleled effectiveness in pest detection and enhance existing control techniques. It’s a quantum leap over any of the current pest intelligence gathering methods currently available.”

Usually aerial detection methods have had a heavy reliance on the human eye via cameras essentially making drones like this ineffective during the night. Ninox Robotics drones, however, are using state-of-the-art duel payload cameras that can switch easily between normal visual spectrum (RGB) and far infrared (thermal) sight.

Video from the camera is streamed live to ground control stations that are manned by highly trained drone pilots, as well as passive screens viewed by landholders and other relevant stakeholders, enabling the viewers to determine the location, number and type of targeted pests.

Ninox Robotics will begin a three-week trial period using its drones at selected sites in southern Queensland and northern New South Wales. The trial will be to test the effectiveness of the drones’ thermal imaging camera to spot invasive pests and domestic animals in a variety of terrain types both at night and in the daytime. During the trial, the information gathered will be combined in real-time with existing control techniques in order to measure the efficacy of the system and its application.

Last week’s trial in southern Queensland succeeded on all fronts, proving that the military-grade drones could detect invasive pests from the air and provide that information in real-time to a pest management officer. It also demonstrated the versatility of the Ninox Robotics system in a number of roles, including a successful mock rescue of a person lost in the woods, searching for small brush fires from over 5km away, and cataloguing a mob of sheep.

This week, the trial will be conducted across farms and national parks in Moonie, Queensland, and will be followed by another trial week in New England in NSW. The upcoming open day on 22 July in Moonie will enable farmers, government officials and other stakeholders to see the drones in action.

“Implementing this trial has been a massive undertaking, working with Australian aviation regulators to test our UAV’s capabilities above and beyond what has been done in this field to date. A drone-related project of this scale has never been conducted by a civilian company in Australia, and we believe it’s the first application of its kind for UAV technology in agriculture anywhere in the world,” says Ehrlich.

Pending the planned outcome of the trial and additional regulatory approval, Ninox Robotics intends to commercialise the service in the coming months, with its first team of fully trained UAV pilots able to be deployed across the country. Ninox Robotics is also exploring additional uses of the technology.

“We are confident that come commercialisation, Ninox Robotics will be able to offer an array of smart, high tech options for Australian government agencies and landholders in dealing with a variety of problems afflicting our continent,” says Ehrlich.

Have you booked travel insurance for your next trip? 19 Nov 2017
Get 15% off your next business venture with Veromo
UBER for Business: Get $20 off the first ride for you and your staff*
Join the Small Business First Canon Rewards Club
Travel Insurance
99 designs