GoPetition bootstrapped To 17M members and 1M uniques per month 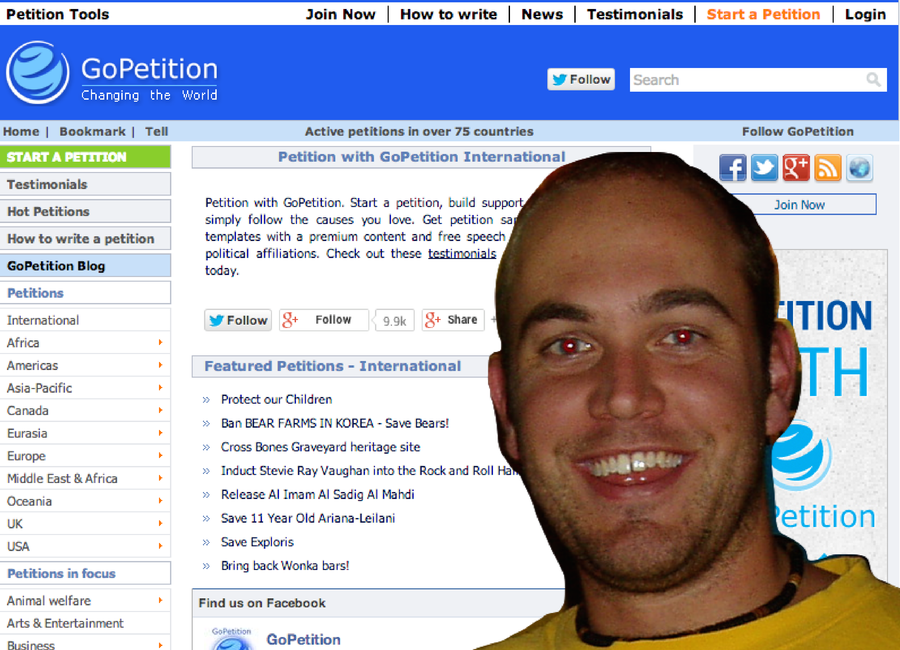 The social change space is a pretty interesting market these days with quite a few Aussies tackling it and some left of centre initiatives going about it in their own way – such as The Trews from Russell Brand or this recent crowdfunding campaign.

There is one Aussie startup that has been creating change on a global scale for more than a decade and its got the numbers to back it up – 17 million database, 246,000 fans on Facebook and 1 million uniques a month.

GoPetition was started by Hamish Ogilvy waaay back in 2000 – before Google, social networks and the easy resources of building websites to scale that us entrepreneurs take for granted these days. The site has hosted more than 65,000 petitions with active petitions in 75 countries, and brought awareness and change to many issues – from campaigning for political awareness around sex trafficking to getting Kim Kardashian off TV.

This was all created with ‘a few thousand dollars’ thrown in at inception.

Hamish Ogilvy, Chief Developer of GoPetition, ex-Head of Data at Datalicious and probably the biggest data driven marketer in Australia (he’s 6’7”), remarks that GoPetition has never been about the money.

“Back when we started, the internet was still pretty new, people with mobile phones were snobs and social media didn’t exist. We thought we could make some money out of it but it wasn’t just about that,” he says.

“There was a better way of doing petitions than sending them around on email or carrying around sheets of paper. We saw things we wanted to change, we knew we could do better.”

The early version of the website – which amazingly is a lot like it is today – was custom built and early traffic gains came through graft. Intuitively, the two-sided market problem was built through unscalable activity.

“We made a lot of calls, sent a lot of emails and talked directly with potential campaigners,” says Hamish.

The site was global from the start and captured a lot of international traffic. The GoPetition team were very active in SEO during the early days and successful, with some weeks seeing 300% leaps in traffic. Organic search is still a decent proportion of inbound traffic, but these days inbound visits are dominated by social media.

“Facebook was an amazing thing for GoPetition, as it grew, so did our traffic. We worked hard at configuring the site for maximum benefit in Facebook’s open graph, which worked very well for us. In the space of just a few years, Facebook went from a tiny proportion of traffic to many multiples of that coming from Google,” says Hamish.

Scaling support to millions of users is not easy. GoPetition’s tactic was to observe pain points generating the most complaints and eliminate them religiously. As a large traffic site, the ratio between support requests and visits was critical. In order to scale traffic, support had to stay manageable.

‘The interesting side of this is that an awful looking old site can actually be very efficient for users. We typically learned our hardest lessons when deploying new features, exactly for this reason.’

Pre cloud days, hosting was a major headache. Early on, GoPetition was hosted on a shared server which worked well with a few thousand unique visitors a day, but one day a petition ran hot and traffic spiked to 500,000 visitors in a single day.

The traffic blew their servers and every one of their web hosts client websites. With hundreds of customers complaining, they made the decision to cancel GoPetition’s hosting.

At an inflection point of success, the site was offline for a week. It was a tough lesson. A major outage happened again when a petition to remove the Kardashians from TV got picked up by all the major news channels in the US.

These are all incredible lessons to learn for a tech-oriented entrepreneur. So where to next?

Hamish is now working on a new startup called Sajari, which is a search, personalisation and recommendation engine that can be added to any website with just one line of javascript.

It’s a big data, machine learning and platform play all rolled into one and it’s underpinned by a powerful algorithm that might just be the world’s first large query search engine, using documents as input rather than keywords.

“GoPetition continues to grow organically without any outside investment and only a handful of staff, which is pretty amazing. At some point, we may need to change that to take it to the next level, – we’ll see,” says Hamish.

If they don’t, then like the lessons along the way will be invaluable.

Disclosure: I currently work for Sajari

Lloyd Perry is the founder of Big Richard Condoms and Flow Spark Studios He consults regularly on startups, sales and marketing and often feels the need to guest blog. His latest startup project is available now on the app store.